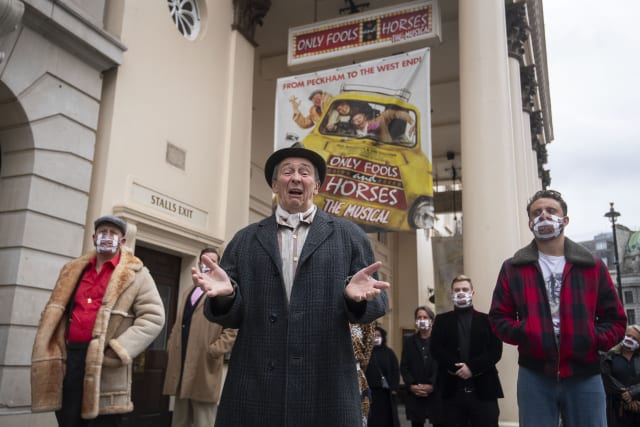 Paul Whitehouse has led the cast and crew of Only Fools And Horses The Musical in a silent protest in solidarity with the theatre industry and to call for guidance from the Government on when theatres can reopen without social distancing.

The actor and others involved in the West End show joined a socially distanced 15-minute silence outside the Theatre Royal Haymarket, many wearing Only Fools And Horses-branded masks, to draw attention to the number of people affected.

Whitehouse, who plays Grandad in the show and co-wrote the musical adaptation along with Jim Sullivan, the son of the writer of the sitcom, John Sullivan, told the PA news agency: “It’s a silent vigil to highlight the plight not just of the luvvies but everyone associated with the theatre.

“The crew, the maintenance staff plumbers, electricians, carpenters, set designer, stage hands, front of house staff, it goes on and on and that is the crux of it, the crucial point we are trying to make, all these jobs and businesses depend on a vibrant theatre sector, apart from the fact it’s the cultural heart of London.”

Whitehouse warned that London is at risk of losing “a whole chunk of our cultural heritage”, as well as the loss of jobs and money.

He said: “People’s welfare needs to be considered here and if we don’t start opening up soon, it will diminish.

“It’s a business thing too, it brings in extraordinary revenue and at some point we can’t furlough everyone forever, its not the Government’s money, it’s taxpayer money, it’s our money, we are paying ourselves.”

Indoor theatre productions can currently go ahead as long as the audience is socially distanced but many theatres have said it is not financially viable to stage productions with such a reduced capacity.

The Government has not yet set a date for when theatres can open without social distancing.