New BBC boss: We cannot be complacent about our future 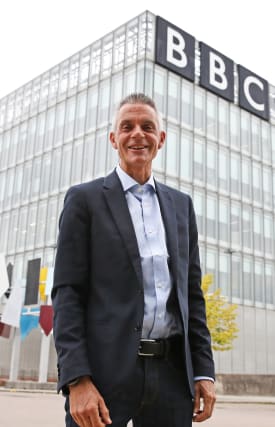 The BBC’s new boss has warned staff that the broadcaster cannot be “complacent” about its future.

Tim Davie said it is time to “renew” the corporation’s commitment to impartiality, and signalled a crackdown on use of social media.

He said the BBC has spread itself “too thinly” and now needs to think about which shows it can stop making.

His first speech to staff came amid controversy over impartiality at the organisation.

The director-general said the broadcaster has “no inalienable right to exist” but described the coming years as a “winnable battle”.

The BBC is “still relevant in millions of people’s lives … but, as we look to the future, there is no room for complacency,” he said.

“If current trends continue, we will not feel indispensable enough to all our audience.

“The evidence is unequivocal – the future of a universal BBC can no longer be taken for granted.”

He said that “too many” people “perceive us to be shaped by a particular perspective” and the BBC must serve people “across all political views”.

His comments follow controversies over impartiality, including Newsnight host Emily Maitlis sparking a furore with a monologue on the Dominic Cummings lockdown row.

The BBC later said the episode “did not meet our standards of due impartiality”.

BBC Breakfast host Naga Munchetty was rebuked last year after commenting on remarks made by US President Donald Trump.

And one day after Davie took over as director-general, the BBC reversed a decision on the singing of Rule, Britannia! and Land Of Hope And Glory at the Last Night of the Proms.

Davie signalled a clampdown on the use of social media, saying new “rules … will be rigorously enforced”.

“If you want to be an opinionated columnist or a partisan campaigner on social media then that is a valid choice, but you should not be working at the BBC,” he said.

He also said the broadcaster has spread itself “too thinly” amid competition from streaming giants.

He suggested it is time to “stop” making some shows and called for an end to “dangerous” navel-gazing at the BBC.

His speech, as questions are raised about the future of the TV licence, made clear that he opposes the idea of “a subscription” model, saying it would “serve the few”.

But the “deep attachment” the audience have with the BBC “is under pressure and cannot be taken for granted”, he added.

He said there are no short-term plans to shut channels but “this moment marks the end of linear expansion for the BBC”.

And “we will not hesitate to close channels if they do not offer value to our audiences”, he added.

Presenters have hit the headlines for pocketing money for work for private companies over the years and Davie said there would be “clearer direction on the declaration of external interests”.

He added that the BBC will also focus on “extracting more value from online” and, as its finances come under pressure, “build commercial income”.