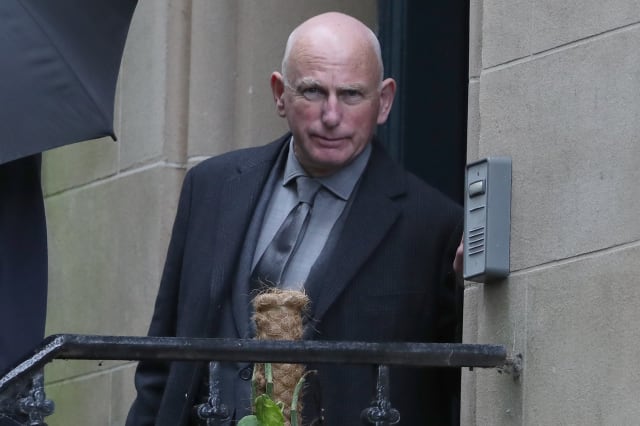 Actors were seen rehearsing for a fight scene on the Glasgow set of new BBC One thriller Vigil.

Gary Lewis was among those pictured as filming continued on the much-anticipated series from the makers of Line Of Duty and Bodyguard.

Production was halted earlier this year due to Covid-19 but filming on the six-part drama resumed last month in and around Glasgow.

Scottish actor Lewis, 62, was pictured wearing a dark suit and coat as he spoke to a member of the crew, who was wearing a face covering, on the steps of a house.

One actor was seen arriving at the property wearing a police uniform, while a police car was delivered to the set on a low loader vehicle.

Two more actors rehearsed for a fight in the street, grappling with each other before the man appeared to grip the woman in a choke hold.

Vigil tells the story of how the mysterious disappearance of a Scottish fishing trawler and a death on board a Trident nuclear submarine bring the police into conflict with the Navy and security services.

Jones, who is playing DCI Silva, leads an investigation into a conspiracy that “threatens the very heart of Britain’s nuclear deterrent”, according to the BBC.

The show is written by Bafta-nominated writer Tom Edge and produced by World Productions, which is part of ITV Studios and brought the hit series Line Of Duty and Bodyguard to the BBC.

There are also episodes by Ed Macdonald and Chandni Lakhani.

It is directed by Bafta winner James Strong, who worked on Broadchurch, as well as Shetland’s Isabelle Sieb.