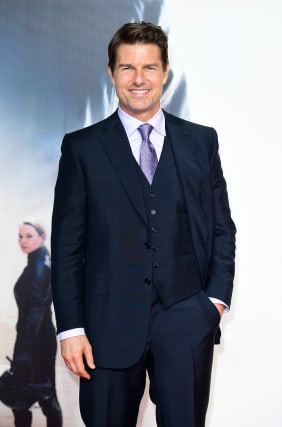 Tom Cruise masked up as he returned to a cinema for a London screening of Christopher Nolan’s spy blockbuster Tenet.

Mission: Impossible star Cruise, famous for doing his own stunts, did his bit for the ailing film industry as he proudly visited a theatre, some of which have re-opened following months of lockdown.

In a video shared to social media, Cruise drove through the streets of London, taking in some of the city’s best known landmarks – including Buckingham Palace – before arriving at a cinema.

After being recognised by fans, despite wearing a mask, he climbed out of his taxi and posed next to a Tenet poster, saying: “Back to the movies.”

The footage cut to inside the theatre, showing the moments before the film started and just after it finished.

Amid applause from the audience, Cruise told his fellow cinema-goers: “Great to be back in a movie theatre, everybody.”

As he left the building, he told a fan he “loved” Tenet. Cruise, 58, captioned the video: “Big Movie. Big Screen. Loved it.”

Tenet, which stars John David Washington and Robert Pattinson, was already set to be one of the biggest releases of the year before the coronavirus pandemic lurched Hollywood into crisis.

Now, theatre chains are hoping the critically acclaimed film will entice audiences back inside after months of lockdown.

Cruise, who was filming Mission: Impossible 7 before production was halted by the pandemic, is next set to appear on the big screen in July 2021 in Top Gun: Maverick.

The action sequel was originally set for release in June this year before being delayed by the pandemic.