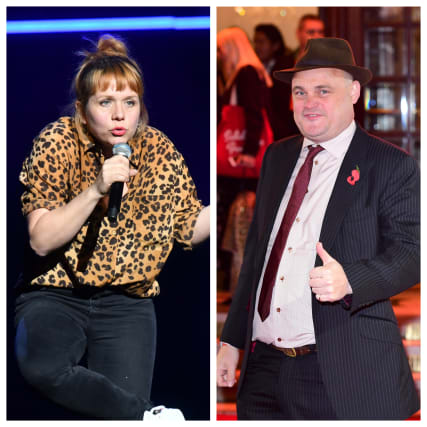 Al Murray, Ed Gamble and Kerry Godliman are among the comedians who will take to the stage in front of a live audience for a charity gig as socially distanced indoor performances are allowed to resume in England.

The Government had previously given the green light for performance spaces to welcome back audiences last month, however the move was delayed amid a rise in the prevalence of coronavirus in the community.

But Prime Minister Boris Johnson has now given the go-ahead to resume indoor performances from Saturday, except in locations such as Manchester where additional restrictions have already been imposed.

Earlier this month the Clapham Grand in London hosted a live-streamed comedy show as an online fundraiser, without an audience present.

But the next scheduled fundraising gig in the Save Live Comedy series, due to take place on Sunday August 16, will now have a small audience present, as will the next show on August 23.

The proceeds of the three shows will be split across a network of comedy clubs and promoters who are financially struggling as a result of the coronavirus pandemic.

The venue previously hosted a Frank Turner gig with a socially distanced audience as part of a Government pilot programme.

Ally Wolf, manager of The Clapham Grand, said: “We are excited to announce that after the decision by the Government to allow indoor events, we have released a limited amount of tickets to watch our Save Live Comedy shows live.

“We are broadcasting TV-quality live-streamed comedy and now we get to have an intimate audience at the same time.

“It’s going to be our very own version of Saturday Night Live or Live At The Apollo as some of the brightest new stars and biggest names in comedy take to our stage to help raise funds for their community as Al Murray and Jayde Adams are joined on the bill by Ed Gamble, Kerry Godliman and many more.

“The first physically distanced live comedy show being streamed to the world whilst helping Save Live Comedy in the process. How cool is that?

“After running a successful Government-endorsed pilot for the first-ever physically distanced indoor gig, with Frank Turner on July 28, we had always planned to do more events and had hoped it would be in time for these amazing comedy streamed shows.

“This allows us now to have an audience enjoying entertainment safely inside our venue whilst broadcasting to thousands of people around the world, giving us the chance to implement our vision for how The Clapham Grand can reopen safely and successfully with physical distancing and full Covid compliance inline with all Government guidelines.”

The announcement that venues can reopen with social distancing has been welcomed but many institutions have said it will not be financially viable for them to welcome audiences until social distancing is scrapped.

Julian Bird, chief executive of the Society of London Theatre and UK Theatre, said: “We are delighted that from Saturday the Government has announced that stage 4 of the roadmap can proceed and allow the opening of indoor performances with social distancing – this is a step further to full reopening and will help those theatres who have already made innovative plans to open.

“Theatre wants to take its place alongside restaurants, galleries, museums and cinemas in being a major contributor to the economic and social recovery of the nation, as well as entertaining our audiences and supporting our local communities.”