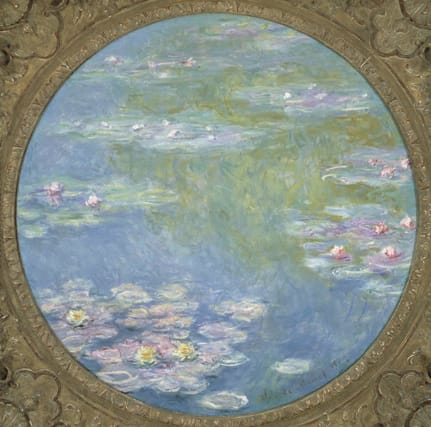 Three of Monet’s “spectacular” water lilies paintings will go on show together at the National Gallery.

The large works will be brought together in an exhibition on the decorative arts of the Impressionist painters.

The artists are best known for their outdoor canvases.

But the exhibition will also show “a little-known” aspect of their work – on decorative panels, painted doors, tapestries, ceramics and fans.

More than 80 paintings and objects by Monet, Renoir, Pissarro, Morisot, Degas, Cassatt, Cezanne, Manet and Caillebotte have been loaned from around the world for the exhibition.

They include three of the large, late water lilies by Monet. The French artist created hundreds over three decades until his death in 1926.

Impressionist Decorations: The Birth Of Modern Decor will cover five decades, from the 1860s until the 1920s.

The exhibition is organised by the National Gallery and the Musee d’Orsay et de l’Orangerie, Paris, where it will open in April, before going on show in London in September next year.

The gallery, in Trafalgar Square, became the first of the big institutions to reopen its doors last month, following the easing of lockdown measures.