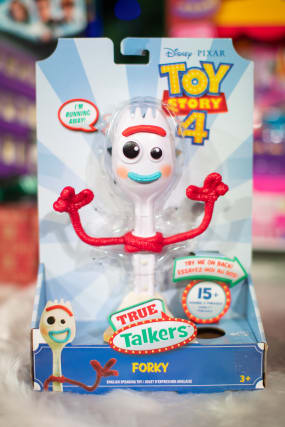 Tony Hale, who voices Forky in Toy Story 4, has said adults could benefit during the coronavirus pandemic by learning from the “simple truths” in Pixar films

The actor, best known for roles in Arrested Development and Veep, praised the animation studio’s focus on the value of community.

Forky, a plastic spork saved from the rubbish dump, became the stand-out star of the fourth and final instalment of the well-loved film series.

Hale, 49, told the PA news agency: “The thing about Pixar movies is that it’s all about these simple truths.

“You look at the Toy Story franchise and there’s this group of characters who have had each other’s backs, they have stayed together and supported each other.

“Now we are in the middle of a pandemic, where we have seen the value of community, and look at Forky – he comes and is very curious about life, he has very simple questions, like ‘What is a friend?’ and ‘What is love?’.

“These are things adults need to be reminded of all the time. All these simple truths.”

Hale, who is one of a number of stars taking part in Disney’s Pixar Fest, admitted that his 14-year-old daughter was embarrassed by his Toy Story role.

“This is the embarrassing stage. Everything I do is humiliating to her,” he said.

“There are times when if a parent has a child and says that I am Forky, then I will do the voice for the child and my daughter just melts into the ground.

“My responsibility is to embarrass my children.”

During Pixar Fest, a virtual family festival marking the 25th anniversary of Toy Story, Hale is hosting The Golden Lamp Awards to recognise the most memorable Pixar film moments.

The festival will run from August 9 to September 6 and feature a collection of Pixar films on the Disney+ streaming service, weekly watchalongs, animator masterclasses and more.

It will be followed by a US festival beginning on September 5.

Disney has also pledged £750,000 to the MediCinema charity, to help reach more children by developing and building hospital cinemas in the UK and Italy.

Hale said: “They bring state of the art cinemas into hospitals so children and patients can bring their beds and wheelchairs and equipment into the room and enjoy these movies.

“The different perspectives and the joy that Pixar can bring can give them a spark in their day, which is mostly filled with possible isolation and fear being in the hospital.”

Disney will also mark the launch with the release of early artwork showing the evolution of Buzz Lightyear.

Tasia Filippatos, senior vice president of Disney EMEA, said: “Pixar revolutionised the art of animation 25 years ago with the release of Toy Story and since then has brought us some of the most iconic and unique moments in filmmaking history.

“Pixar Fest will give fans of all ages the chance to celebrate their favourites through a host of activities and even cast their vote in The Golden Lamp Awards. We hope the line-up brings some summer holiday fun and movie magic to homes across the UK.”

Kat Mason, chief executive of MediCinema said: “In our 20th anniversary year and 20 years of working with Disney, we are incredibly happy to be the recipient of this donation that will help ensure our cinema services can impact so many more children and their families.

“In addition, all money raised from the prize draws will help to make sure we can keep our current services running, which is more important now than ever for children and their families facing time spent in hospital.”

Pixar Fest will run from August 9 to September 6 in support of MediCinema.