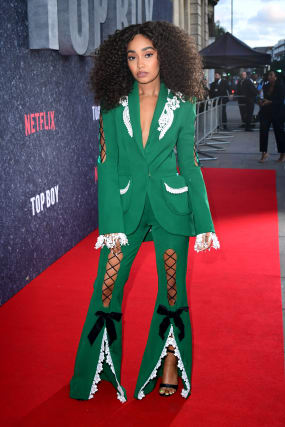 Stars including Little Mix’s Leigh-Anne Pinnock, The Saturdays’ Rochelle Humes and Walking Dead actor Lennie James have been praised for sharing their experiences of racism in The Talk.

The hard-hitting documentary featured celebrities explaining how black parents have to warn their children about the discrimination they can face because of their skin colour.

Pinnock, who was joined on the show by her parents John and Deborah, revealed she was nine years old when a boy at school wrote her nationality as “jungle”.

She said: “I had a little incident in primary school. I had a boy write on a piece of paper, name – Leigh-Anne, age – nine, nationality – jungle. And I saw it and my heart just dropped.

Humes, who was seated next to husband Marvin Humes, broke down in tears as she recalled not being invited to a birthday party “because she was black”.

The incident led to her trying to “scrub her skin off”. Humes, who is expecting her first child with Marvin, added: “I’m not upset for me.

“I’m upset because my little girl is the same age and I just don’t know how I would handle that.”

And James, 54, revealed he was 11 and riding his bike on the pavement when a police officer called him the n-word.

“And it just knocked me for six,” the actor said. “I’d love to meet that guy and just ask him what the f*** did he think he was thinking?  What was he doing?  Who did he see?”

Viewers shared their support on Twitter. TV presenter Jake Humphrey is the co-founder of production company Whisper, which made The Talk.

He said he has “never been prouder” of the company and added: “We need to create a version of this heartbreaking show to be played to every school kid in the country.”

One viewer said it was “such an eye opening programme,” adding: “Thank you to everyone who took part & everyone who created this.”

Another tweeted: “That was so powerful. I really hope everyone has learnt something tonight and let’s make a change in society.”

And another said The Talk is a “must watch,” adding it is a “powerful way to educate yourselves on growing up as a black person in the UK”.