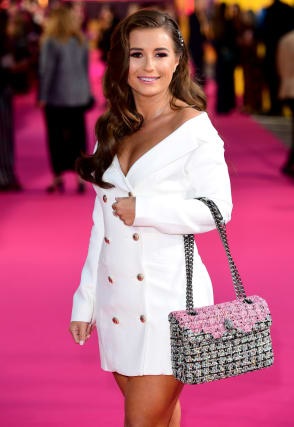 Dani Dyer has shared an update on her pregnancy, saying the first few months have “been really hard”.

The reality TV star announced last week that she is expecting her first baby with boyfriend Sammy Kimmence.

In a long Instagram post, the 24-year-old wrote: “14 Weeks. I’ve really started noticing the changes in my body and I’m definitely embracing it.

“Apparently at this stage I’m supposed to feel ‘on top of the world’ which I really hope for as the first few months have been really hard.

“I’ve had loads of messages from people so thought I’d share my experience so far. And honestly your responses and little tips have been amazing I really feel like it is like a little community on here and I love it lol.”

Dyer, the daughter of EastEnders actor Danny Dyer, won ITV2’s Love Island alongside Jack Fincham in 2018, but the pair split in 2019.

Her Instagram post continued: “I’ve been lucky with not being physically sick. But I’ve definately (sic) suffered with the nausea, always being tired but waking up at stupid times and horrendous migraines (I will definitely be trying out all the new things people have recommended me so Thankyou).

“I’ve had to say goodbye to salads and hello to anything that can go inside of a sandwich or a roll because for some reason a plain salad makes me GAG! All I want is carbs carbs carbs.

“At first I felt terrible I didn’t want to exercise or do anything I just wanted to lay on the sofa and sleep. But there is NOTHING wrong with that, I think I’ve learnt everyday I will feel different! Some days I’ll have energy some days I won’t even want to get out of my pyjamas and that’s totally ok.

“There’s always a lot of pressure on how you should feel but we are all different. I actually want to shout out to the women that write on netmums because they have got me through the worrying😂.

“I’ve honestly never ever been a hypochondriac until now. I have drove myself mad with worry over every single niggle or pain or if I have had a headache that lasted more than a day I have been on the phone to 111. But I am calming down now, you can’t help but worry the first few months as it really is the hardest because you want it all to be positive and ok.”

She ended her post writing: “Wishing all my beautiful pregnant ladies a healthy and safe pregnancy. Thinking of you all.”

The couple announced their happy news on Instagram with a photo of herself holding up a picture of a scan and Kimmence kissing her on the cheek.

She wrote: “Little bubba can’t believe you are going to be ours.

“Me and Sammy are so excited to start this next chapter in our lives, feel so lucky and grateful … 2021.”

The couple first got together before she starred on Love Island and rekindled their romance after her split from Fincham.

Dyer first found fame on ITV2 reality show Survival Of The Fittest, but she was injured in the early stages of the show and had to leave early.