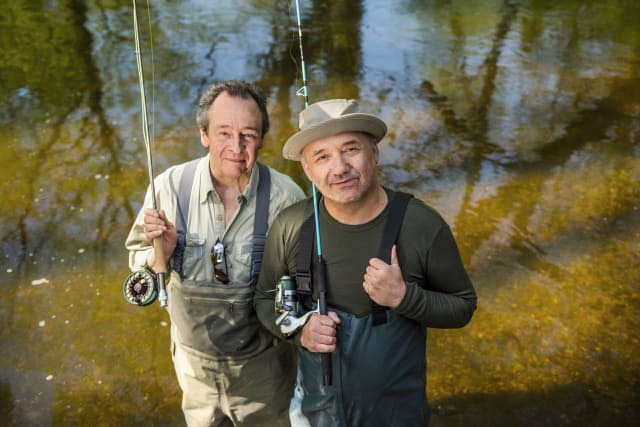 Bob Mortimer and Paul Whitehouse have shared an insight into their planned acceptance speech – after missing out on the features TV Bafta.

The pair pre-recorded their address from the middle of a lake wearing black tie, in a nod to their programme, Mortimer & Whitehouse: Gone Fishing.

They ultimately missed out to The Misadventures Of Romesh Ranganathan, but quipped: “Next year?!!”

ITV celebrated the success of Emmerdale in the soap and continuing drama category – beating Casualty, Coronation Street and Holby City to the gong.

Nick Miles, who stars as Jimmy King in the long-running show, was among the cast members celebrating online.

“Oh yes, we won the #BAFTA and honestly, we bloody deserved it this year, our whole gang have been magnificent,” he wrote on Twitter.

Mark Charnock, best known as Marlon Dingle in Emmerdale, wrote of his love for the team behind the show.

He said: “I can’t quite put into words what this #BAFTA win means. It’s a testament to a remarkable gang of dedicated people who work tirelessly.

“Great year to be on @bbcstrictly and it’s such a brilliant show with everyone from the runners to the bosses. Everyone such a team.”

Kelvin Fletcher, who won the 2019 series with Oti Mabuse as his professional partner, and paralympian Will Bayley both celebrated the win.

Soap star Fletcher quipped of his time on the show: “It’s not how you start, it’s how you finish.”

She said: “Congratulations Stath Lets Flats seriously one of the funniest shows on telly Thank you so much #BAFTA for the Derry Girls nomination and everyone who’s so incredibly supportive of us it’s so appreciated.”

The ceremony broadcast as live on BBC One on Friday from behind closed doors due to the coronavirus pandemic, with nominees accepting their awards virtually.