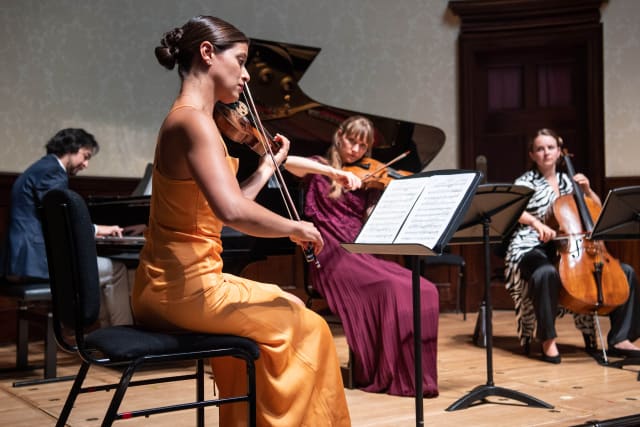 Musicians are worried about “losing their game” while not performing live, a concert hall director has said.

London’s Wigmore Hall will re-open to the public in September, with at least 60 concerts open to live audiences.

Its director John Gilhooly told the PA news agency that it will be compulsory for its socially-distanced audience to wear masks, and it was “bizarre” that the Government had not made it so.

There will be “anti-viral fogging before and after every concert which cleans every seat, sanitisers everywhere and we are making masks mandatory in the hall,” he said.

“The Government hasn’t said that masks are mandatory in a concert hall, which to me is bizarre, but we’re making them mandatory.

“I think they didn’t think it through because they put in all sorts of other stipulations, so it’s an odd one. I think they’ll catch up with it. They’ll realise they should.”

He also said that musicians are like “athletes” and they are worried that too much time away from the stage could rob them of their ability to perform live.

“The reason we’re putting on this series is to get money to the artists,” many of which will not have worked since March, he said.

“It’s also to give them confidence to get back on stage, because a lot of them are worried, of course, if they haven’t been rehearsing (for live concerts), about losing their game, because it’s like being an athlete.

“So it’s giving them something to focus towards because, yes, they’re at home every day doing their scales or whatever and working on various pieces.

Mr Gilhooly said he was looking forward to a live audience after the success of the online concerts from its empty auditorium, broadcast on BBC Radio 3 during lockdown.

“We’ve had broadcasts from the empty hall. They were wonderful and really uplifting,” Mr Gilhooly said.

“But you can never replace the live audience. It changes the dynamic of how the performance happens, how the artists communicate, and hopefully that will come across online (where it will also be streamed) as well.

“So, it’s a wonderful thing that we’re able to do this and that so many people are able to listen and watch.”

Around 150 British and international musicians will perform, with solo recitals, duos, trios, quartets and larger ensembles at the London venue.

A re-opening concert will take place on August 1, the date that the Government announced that indoor concerts with socially-distanced audiences can begin.

A seven-week-long series of 80 concerts will then take place from September 13 to November 1.

At least 60 of the concerts will be open to live audiences as the auditorium capacity is reduced to 56 (10% of full capacity).

The concerts will also be live streamed on high-definition video on the Wigmore Hall website.