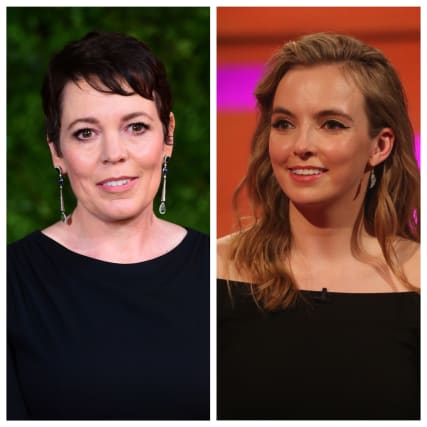 Leading ladies Colman and Comer were joined by other British talent including Brian Cox and Jeremy Irons in scoring nominations.

Oscar-winner Colman saw her portrayal of the Queen in Netflix’s The Crown recognised in the category of best drama actress, where she will be up against her fellow British star – and last year’s winner – Comer, who is once against nominated for her role as assassin Villanelle in Killing Eve.

They both face stellar competition as Jennifer Aniston is nominated for her role in Apple TV+’s The Morning Show, Laura Linney is up for Ozark and Comer’s Killing Eve co-star Sandra Oh also grabbed a nod.

Hollywood rising star Zendaya was a surprise inclusion for her part in HBO’s Euphoria.

Normal People’s Mescal scored his nomination for lead actor in a limited series or movie in recognition of his portrayal of Connell.

However, the acclaimed BBC show was snubbed in the limited series category and his co-star Daisy Edgar-Jones also missed out.

Mescal faces A-list competition in the form of Hugh Jackman (Bad Education), Mark Ruffalo (I Know This Much is True) and Irons (Watchmen).

In the lead drama actor category, Scotsman Cox, 74, was nominated for his acclaimed portrayal of media magnate Logan Roy in HBO’s Succession.

Outstanding drama series, considered by many the biggest award on the night, was won 12 months ago by HBO’s sprawling fantasy show Game Of Thrones, which finished its record-setting run last year.

This year, the nominees are The Crown, Better Call Saul, The Handmaid’s Tale, Killing Eve, The Mandalorian, Ozark, Stranger Things and Succession.

Nominees this time around are Curb Your Enthusiasm, Dead To Me, The Good Place, Insecure, The Kominsky Method, The Marvelous Mrs Maisel, Schitt’s Creek and What We Do In The Shadows.

The build-up to this year’s nominations announcement was severely disrupted by the coronavirus pandemic.

While the major platforms, including HBO and Netflix, would usually hold glitzy events to promote their shows to the TV Academy’s voting body, made up of roughly 23,000 industry figures, this time around they were forced to go virtual.

The health crisis has thrown the wider awards show industry into disarray.

Major Hollywood events including the Oscars, Screen Actors Guild Awards and Golden Globes have been postponed in response to the pandemic halting production and closing cinemas.

Jimmy Kimmel is set to host the 72nd Primetime Emmy Awards on September 20.