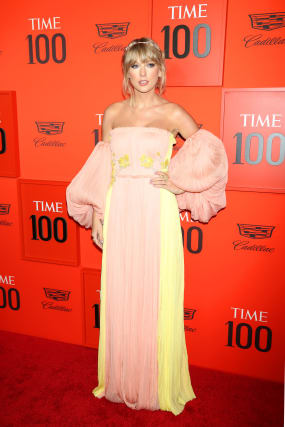 Taylor Swift is on course to claim her fifth UK number one album, with her surprise release Folklore.

The singer’s eighth studio album outperformed the rest of the top five combined, according to the Official Charts update, and was the most downloaded and streamed album over the weekend.

It is solely available in digital formats until it gets a physical release later in the year.

Three songs from the album are on track to debut inside this week’s Official Singles Chart top ten – Cardigan, Exile with Bon Iver and The 1.

The pop superstar announced the album on Thursday, revealing it had been recorded during lockdown, and it was released in the early hours of Friday morning.

The 30-year-old singer, who had been set to headline Glastonbury before it was cancelled by the coronavirus pandemic, said now felt like the right time to release Folklore.

She said: “Before this year I probably would’ve overthought when to release this music at the ‘perfect’ time, but the times we’re living in keep reminding me that nothing is guaranteed.

“My gut is telling me that if you make something you love, you should just put it out into the world. That’s the side of uncertainty I can get on board with.”

Ronan Keating’s eleventh studio record Twenty Twenty leads the way on CD sales and is poised to take the second spot on the chart.

The album features a mix of brand-new songs and updated versions of his best-known hits.

Meanwhile Bob Marley and The Wailers’ Legend, is set to take fifth place following a release on picture disc vinyl.

The album has had the second-longest UK top 100 reign behind Abba’s Gold; this week will mark its 936th stint.

Pop Smoke’s posthumous record Shoot For The Stars, Aim For The Moon, is poised to hold steady at three, while Juice Wrld’s posthumous Legends Never Die will slip to four.

Fiona Apple could collect her first UK top ten album this week with Fetch The Bolt Cutters, currently at nine following its release on physical formats, after it debuted at 33 in April as a digital-only release.