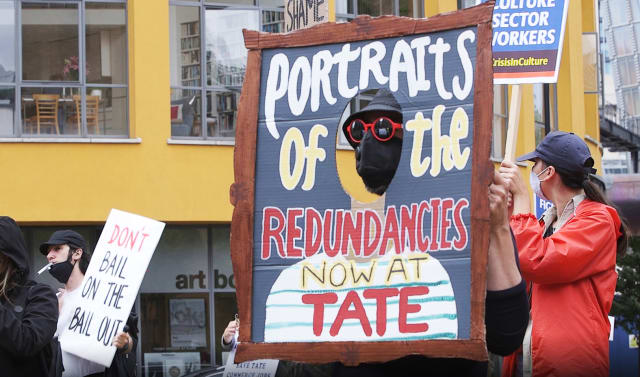 Protesters claiming that proposed job cuts will disproportionately affect BAME workers at the Tate gathered outside one of its galleries as visitors were welcomed back for the first time in months.

Dozens of demonstrators stood outside Tate Modern in London with banners, megaphones and drums as a long queue of visitors waited to file into the venue on Monday.

The Public and Commercial Services (PCS) union has said that a consultation by a subsidiary of the galleries could see more than 200 workers lose their jobs, with those on the lowest pay and from ethnic minorities being the worst affected.

Tate Enterprises Ltd, which runs the catering and retail services, is consulting on restructuring the business to cope with the fall in visitor numbers caused by social distancing guidelines.

The consultation could affect Tate Britain and Tate Modern in London, as well as Tate galleries in Liverpool and St Ives in Cornwall, all of which reopened on Monday with social distancing measures in place.

The PCS said in a statement that it is asking the Tate to “protect the poorest-paid staff, and invest in their most diverse teams”.

“This would be a good start in showing that black lives, and black and minority ethnic workers, truly matter to the Tate,” it added.

A union representative at the socially-distanced protest, who did not want to be named, said those most at risk of redundancy “are the most diverse portions of Tate on the lowest salaries”.

“What will the Tate actually look like after that sector is gone?” he said.

“Putting those most vulnerable in the community without work is short-sighted.”

PCS is balloting its members on strike action.

The union’s general secretary, Mark Serwotka, said it is “staggering” that the Tate has not used some of the money it has received through grants to support “loyal staff who support some of our country’s most important cultural sites”.

“We will support our members in whatever they decide to do, including prolonged strike action,” he added.

Tate Enterprises Ltd directors Hamish Anderson and Carmel Allen said in a statement that social distancing guidelines “will impact the ability to operate retail and catering outlets in the same way as before” and visitor numbers will decrease.

“We in Tate Enterprises Ltd are therefore having to make the difficult decisions that many businesses in the hospitality and retail sectors now face and have begun a collective consultation to restructure the business,” they added.

“In order to reduce losses once the galleries reopen, and to resize in line with expected demand in the longer term, we have entered a period of collective consultation with our staff.

“We are working hard to retain as many of these staff as possible and have modelled as optimistically as we can with a view to ensuring the long-term future of the business.

“This consultation is across all areas of Tate Enterprises Ltd and affects all levels of staff.

“Our aim is to be as supportive to our colleagues as possible in the circumstances.”

Tate Enterprises Ltd does not expect to receive any Government funding despite the announcement of a £1.57 billion support package for the arts, they added.

Visitors to the newly reopened galleries are being encouraged to wear face masks and use hand santiser as they follow one-way routes around the galleries.

Visits must be pre-booked and people are being urged to make any payments using their cards.