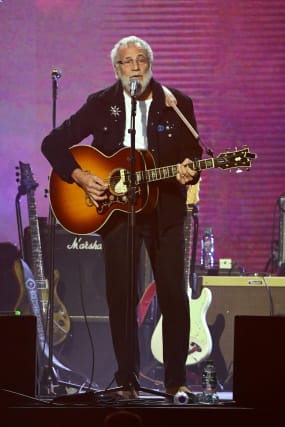 Yusuf/Cat Stevens has opened up on why he never took to the stage at Live Aid and said organisers were "probably right not to have me".

The singer-songwriter had been set to perform at the benefit concert in 1985.

However 72-year-old Stevens, who converted to Islam in 1977 and later went on a hiatus from music, said organisers were concerned when he turned up without his guitar and "conveniently I was left out of it".

Speaking to the Radio Times, he said: "I turned up without my guitar and I think they were a bit worried about what I might do. Elton over-ran a bit and conveniently I was left out of it. I didn't mind. I felt that was a sign to exit and that's what I did for many years."

Stevens, who goes by the name Yusuf Islam, also revealed he planned on reading a poem on stage at Live Aid.

He said he was not concerned by the potential career boost performing at such a high-profile event would bring, saying "I was on my way out of music at the time".

Stevens said: "I was going to read a poem. It was a good poem but I think they were probably right not to have me. They made the right decision."