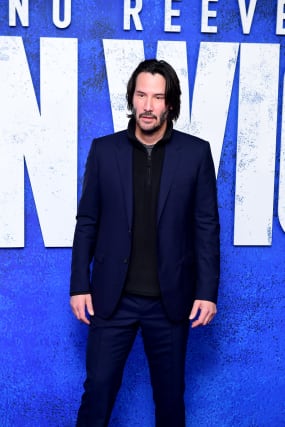 Director Dean Parisot has admitted he was originally daunted by the task of bringing Bill & Ted back to the big screen, almost 30 years since the last film was released.

Keanu Reeves and Alex Winter are reprising their title roles in the long-awaited comedy sequel Bill & Ted Face The Music.

Now in middle age, the time travelling duo enlist the help of their daughters after being tasked with writing a song that will save the universe.

Face The Music is the follow-up to the second film in the franchise, 1991’s Bogus Journey, which was a sequel to 1989’s Excellent Adventure. Parisot admitted the years-long gap made a return challenging.

Speaking during the film’s Comic-Con@Home panel, he said: “It’s daunting. They’re iconic and it’s very hard to come back after 30 years. All of that was part of the puzzle of putting it together, but to contemporise it – to also bring these characters back in middle age and to find their daughters.”

Face The Music introduces Samara Weaving and Brigette Lundy-Paine as Bill and Ted’s daughters, while William Sadler reprises his role as the Grim Reaper.

Hollywood actor Reeves, known for action movie franchises including The Matrix and John Wick, said the Bill and Ted films give him special satisfaction.

The 55-year-old said “I can’t feel or laugh” the way he does on Bill and Ted, adding: “That doesn’t exist anywhere else in the world for me.”

Winter agreed and said one of his favourite moments on set was early on in production.

He said: “The movie was really hard, physically. We’re older, and the script was even more physical than the first two, for Keanu and myself especially.

“It was super physical and I remember about halfway through week one, I think we were shooting one of the iterations of our former selves and I just remember the whole kind of family is there and all these people who I’ve known most of my life.

“And Keanu and I were kind of getting ourselves up to speed after all this rehearsal. And I just remember we go into the characters, these sort of rocker characters we play in this one sequence, and we just kind of went off.

“And I remember coming off set and looking at him and him looking at me just like, ‘Bill and Ted are f***ing back.”

Bill & Ted Face the Music is set to be released in cinemas and VOD in the US on September 1. A UK release date is yet to be confirmed.