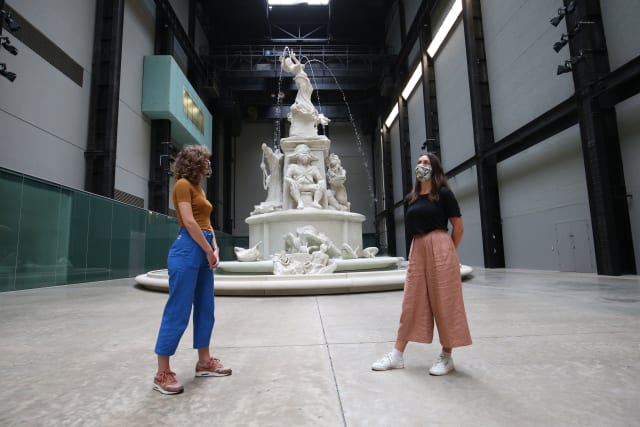 The director of the Tate Modern has said the gallery’s reopening marks “day one” in its history and warned a second lockdown would be a “catastrophe”.

The gallery on the South Bank in London, as well as the Tate Britain, Tate Liverpool and Tate St Ives, will reopen to the public on Monday July 27 with social distancing measures in place.

“After days of darkness and stillness we now switch on Kara Walker’s Fons Americanus,” Frances Morris said as the 13 metre-high fountain piece in the Turbine Hall began to flow again.

The Tate galleries, which are relaunching with exhibitions of Andy Warhol, Aubrey Beardsley and Naum Gabo, have introduced measures including advanced booking, one-way systems and enhanced cleaning regimes to combat coronavirus.

Speaking to the PA news agency during a preview at the Tate Modern, Ms Morris said there has been “great anxiety but also excitement” ahead of the reopening.

She warned a second wave and lockdown could have serious ramifications for the Tate galleries.

“It’s difficult to plan for a catastrophe but the lessons we have learned over this period are hugely beneficial,” she said.

“Some of our processes will change in a way that means they won’t be so impacted by a future lockdown.

“But of course we dearly hope that there won’t be a future lockdown.”

Ms Morris said the Tate galleries had been “on a roller coaster for two decades”, during which they had “thought ambitiously about the future” and aimed for more growth.

She said: “We are now thinking: ‘What is a different scenario here that is around thriving in uncertainty?’

“And how can you recharge your organisation to be more resilient and more responsive, fleet of foot, put people at the heart of everything you do?’

“When I say ‘day one’, I mean day one. Those conversations will go on regardless of what happens, because we are changing gear.”

She said: “We don’t know yet the impact on art but I have just been up in one of our galleries which focuses on the immediate aftermath in art after the Second World War, the Holocaust, the atomic bomb, the beginning of the end of empire, and you see this extraordinary and different kind of art.

“There’s an almost existential shift in the kind of art and representation of humanity.

“It’s going to be interesting to see what happens after Covid and I am sure we will see in retrospect that there is a shift in the way artists are making art, the images they are thinking about, the messages they are making.”

Some 30 protesters gathered outside Tate Modern recently with signs and placards to protest job cuts at the gallery, saying they could be in the hundreds.

Ms Morris said Tate Modern’s footfall is estimated to drop by 50%, with its cafes and restaurants to only partially reopen, and the “financial situation is very difficult”.

Addressing the cuts, she said: “I don’t know how the process will take shape but those are people we have worked with on a daily basis over the last few years.

“We care deeply about them and there is a tragedy to what is happening, not just at Tate but across many of our business sectors, particularly in retail and restaurants and bars.”

She confirmed senior staff at Tate had taken a salary cut amid the pandemic.

Museums and galleries in England were allowed to welcome visitors again from July 4 but bodies including the Art Fund have warned some may never reopen due to financial pressures.

Among the hundreds of artworks going back on display at Tate galleries is Sir Steve McQueen’s acclaimed Year 3, a portrait of London’s Year 3 pupils.