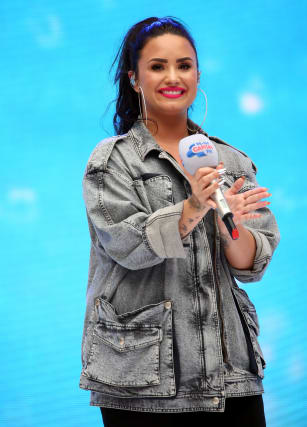 Demi Lovato reflected on her “miracle day” as she marked two years since she suffered a near-fatal drug overdose.

The pop star, 27, was taken to hospital in Los Angeles in July, 2018, after relapsing following six years of sobriety.

She announced her engagement to actor boyfriend Max Ehrich this week and marked the anniversary of her overdose with a heartfelt message on Instagram.

Sorry Not Sorry singer Lovato described it as her “miracle day”, saying she was “blessed” before thanking the doctors at Cedars-Sinai Medical Centre who saved her life.

She wrote: “Only 2 years after that terrible day, I’m engaged to the love of my life and I can genuinely say I feel free of my demons. Each and every one.

“I never thought this feeling was possible. And it’s not just because I fell in love (although that didn’t hurt), but because over the past 2 years, I’ve done more work on myself than I have in my entire life.

“Things that used to keep me down for weeks or even months, pass like tropical storms because my relationship with God has provided me infinite security.”

Lovato shared a black and white video of her with her eyes closed while listening to Paramore’s hit love song The Only Exception, saying Ehrich told her to shut her eyes before he proposed at a beach in Malibu.

Lovato wrote: “Long before I had an engagement ring on my finger, I had the word ‘me’ to remind myself that no matter what, I vow to love myself.

“You can’t fully love another without loving yourself first. Thank you God for this peace and understanding  but most of all giving me the strength to fight through my darkest times.”

Lovato, a former Disney Channel star, thanked her family, friends and fans and signed the post off with: “I love you all.”