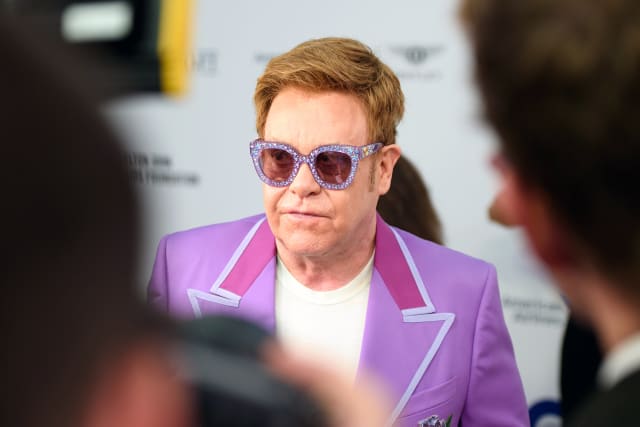 Sir Elton John has denied claims passages of his bestselling memoir breached an agreement with his ex-wife not to talk about their marriage, court documents in a £3 million privacy case against the singer show.

Renate Blauel is suing the 73-year-old for allegedly breaching an agreement the pair signed after their divorce in 1988 following a four-year marriage.

In papers filed to the High Court seen by the PA news agency, the pair signed a contract which included a clause preventing either of them from discussing their marriage or the reasons for their separation.

Ms Blauel is now suing Sir Elton over "repeated and flagrant" breaches of the agreement in his 2019 memoir Me and in the biopic Rocketman, also released in 2019.

Elton John
The Princess of Wales is greeted by singer Elton John for the charity premiere of the musical 'Tango Argentina' at the Aldwych Theatre, London, in aid of National Aids Trust and Aids Crisis Trust.
Paul McCartney and wife Linda from the band Wings show off their award for Best Single along with Elton John (c) who won the Best Male Singer and Best Concert Awards.
Elton John live in concert in London, circa 1976.
Elton John live in concert in London, circa 1975.
Musician Elton John sings in to the microphone on stage during a gig.
Elton John signs copies of his new album, 'Don't Shoot Me I'm Only The Piano Player' at the Noel Edmonds's Record Shop, Chelsea.
Elton John live in concert at Wembley Stadium in May 1974.
Rock star Elton John performing on stage at Wembley Stadium, Londpn
Bespectacled pop star Elton John and television personality David Frost being presented to the Queen at Windsor when they were among a host of stars appearing in a gala variety performance in the Big Top at Home Park in aid of the Queen's Silver Jubilee Appeal.
British pop singer Elton John (right), Lana Hamilton (second left), wife of actor George Hamilton, and rock singer Rod Stewart (left) at New York's Studio 54, to celebrate at a party given by RCA Records, who signed John to a contract with the recording company.
1982: Chairman Elton John leads his first team squad in a song at Vicarage Road as Watford get ready for their first 1st Division clash against Everton on Saturday at home. The club announced a 400,000 sponsorship deal with truck and bus giants Iveco.
The Ruritanian look for the pop singer Elton John, showing his new uniform in London, that will be his hallmark for his British tour.
File photo dated 19-05-1984 of Watford Chairman Elton John on the pitch before the match
Pop singer Elton John
The Prince of Wales shakes hands with Elton John, flanked by his drummer Ray Cooper (l) and Dire Strait's bassist John Illsley (centre) before tonight's rock extravaganza at Wembley to celebrate 10 years of the Prince's Trust.
Pop star Elton John, left, who sold his controlling interest in Watford FC to Robert Maxwell for �2 million, joins the publishing tycoon in the stands at Oxford.
1989: Pop star Elton John (left) and Bob Geldof at a BBC photocall in London . Elton is one of the singers who will be seen taking part in 'Our Common Future', an hour long programme of recorded musical highlights of the Planet-Aid global concert staged in New York. Geldof will be introducing the concert. CELEBRITY
1991: Elton John (r) meet actress Elizabeth Taylor and her husband, Larry Fortensky, at a Gala reception for the Aids Trust which was attended by Princess Margaret.
1991: Newly married actress Elizabeth Taylor with her husband, Larry Fortensky (2nd l), actor Michael Caine and pop star Elton John (r) at a charity reopening of the refurbished Mirabelle restaurant in London's Mayfair.
Watford President Elton John greets Graham Taylor at Vicarage Road today (Thursday) as he arrives to take up his new job as General Manager/PA. Elton John is back at the helm of division two Watford after heading a consortium of investors to take over at Vicarage Road from Jack Petchey, it was announced on 26.4.97. The multi-millionaire will now chair both the new board and a holding company which now owns the club. The former England manager Graham Taylor, who has been influential in bringing John back to Vicarage Road, will also remain a pivotal figure at the club as general manager.
PARIS : 19/1/97 : ELTON JOHN AND DAVID FURNISH AT THE THEATRE NATIONAL IN PARIS AFTER THE PERFORMANCE OF "LE PRESBYTERE N'A RIEN PERDU SON CHARME NI LE JARDIN DE SON ECLAT". PA NEWS PHOTO BY DAVE CHESKIN.
Rock legend Elton John at the Royal Academy of Music in London where he received an honorary membership today (Wednesday). The singer-songwriter, who has sold 150 million records, joined the exclusive club of eminent musicians, whose 250 members include conductor Bernard Haitink and tenor Jose Carreras. Photo by Stefan Rousseau/PA. Watch for PA story SHOWBIZ Elton.
PEOPLE ROTOR PIC PIC MIKE MALONY................06.09.97 DIANA PRINCESS OF WALES FUNERAL............. WESTMINSTER ABBEY.............. ELTON JOHN AFTER HIS TRIBUTE TO DIANA
The new competitive Elton John coin collection is released by Britain's Royal Mint
The new competitive Elton John coin collection is released by Britain's Royal Mint
The new competitive Elton John coin collection is released by Britain's Royal Mint
The new competitive Elton John coin collection is released by Britain's Royal Mint
The new competitive Elton John coin collection is released by Britain's Royal Mint
Up Next

An Instagram caption posted in September 2017 by the singer which referenced their wedding in Australia is also being referenced in the case.

In the documents, Ms Blauel's legal team said she tried to "shed her identity" by taking steps to conceal her life from the public including changing her name and appearance.

Her claim reads: "As a result of the above breaches, (her) right to privacy and autonomy have been shattered.

"She, and the marriage, have become the subject of widespread press scrutiny and discussion."

Ms Blauel has asked for an injunction to prevent future public disclosures as well as damages and costs said to be around £3 million.

In papers filed in his defence, the singer's legal team denied breaching the agreement, arguing the details in the book, film and Instagram post are public knowledge and that the contract "applies only to private and confidential matters".

Five scenes from Rocketman are referenced in Ms Blauel's claim including scenes showing their wedding day as well as sleeping in separate bedrooms.

Another scene depicts Sir Elton in a group therapy session discussing the failure of his marriage "on account of his unhappiness and in particular his sexuality," the claim reads.

Sir Elton's legal team said that Ms Blauel's claim does not argue it was a breach of the privacy agreement for Sir Elton to come out as gay.

They add that this reason for the pair's separation is no longer private and the scenes would be understood by the audience as a portrayal of a gay man in a heterosexual marriage.

The singer's defence reads: "The fact that the defendant is gay is now very widely known; it may be one of the most widely-known facts in the world of entertainment."

Ms Blauel also referenced passages of Sir Elton's memoir Me, which contained details of Sir Elton's decision to propose, the couple's wedding, as well as the reception and references to their divorce.

Her claim also said she was particularly upset by Sir Elton writing he did not wish to have children in the marriage, while she said the pair did attempt to conceive.

Her legal team claim the alleged breaches were obvious and that Sir Elton knew they would negatively impact her "jealously guarded" privacy.

In his defence, Sir Elton's team argued his wedding, which was attended by several celebrities, was subject to widespread coverage and was a matter of public record, as was his divorce.

Ms Blauel claimed the alleged breaches had prompted renewed attention into her life, "destroying her privacy and causing her to suffer severe psychological consequences".

Sir Elton's legal team said the singer was unaware of any mental health issues she had.

A source close to Sir Elton told PA: "Elton is shocked and saddened by Renate's claim after 30 years of a mutually amicable and respectful divorce, especially as he has only ever praised her publicly."

The source added no mental illness had ever been discussed in the years of friendly correspondence between the pair.