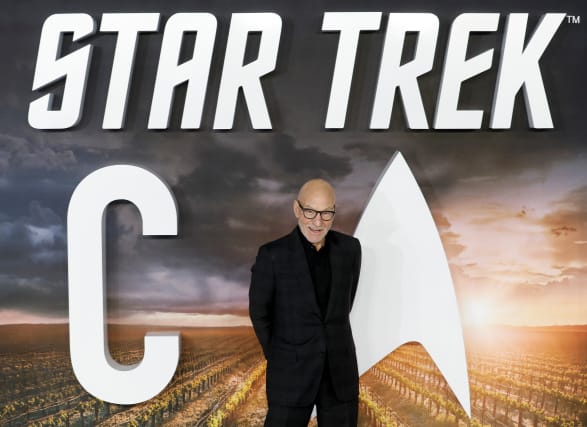 Sir Patrick Stewart joked he is still learning the names of his cast mates on Star Trek: Picard.

The venerated actor, who celebrated his 80th birthday last week, reprised his role as Jean-Luc Picard for the TV series earlier this year, the first time he had played the character since 2002 film Star Trek: Nemesis.

Sir Patrick appeared alongside his co-stars for a Comic-Con@Home panel and said his return was difficult at first due to the amount of time that had passed in both the real world and the Star Trek Universe.

And he admitted he is still yet to learn all his cast mates’ names. Sir Patrick said: “It was at first very challenging because thanks to our brilliant team of writers, we’re living in a very different world, very complex world, profoundly troubled world, which might just be appropriate for the times we’re living in as well.

“For me however, it was a case of ‘sorry, what’s your name? You are who, and you’re playing what?’ Because we had a brand new team. So for me a lot of the first half of the first season was literally about getting to know the people I was working with.”

He added: “I learned their first names, I still don’t know most of their second names.”

His co-stars Alison Pill, Isa Briones, Evan Evagora, Michelle Hurd and Santiago Cabrera all took part in the virtual panel and saw the funny side.

Jean-Luc Picard is one of the most beloved and best-known characters in the sci-fi genre and was first played by Sir Patrick in Star Trek: The Next Generation, the TV series that originally ran from 1987 to 1994.

He was the captain of the starship USS Enterprise. The Picard TV series takes place 20 years after the events of Nemesis and presents a character profoundly changed by the passage of time.

Sir Patrick – who during the panel said he prefers to be called P-Stew than the nickname SPS given to him by his Picard cast mates – said it was the writing team’s vision of who the character was, almost 20 years since his last appearance, that convinced him to return.

He said: “But he was also not the same man. He was a disappointed, sad, guilty, angry, possibly dangerous individual. So that was what absorbed me. As the season wore on, I began to feel as I had begun to feel with Next Generation, that the character was actually inside me anyway.

“And 20 years had passed for Patrick as much as they had for (Picard).”

Earlier in the Star Trek panel, held virtually after the traditional San Diego Comic-Con was cancelled due to the pandemic, a new animated series set in the sci-fi universe was announced.

Star Trek: Prodigy is in development for Nickelodeon and will “follow a group of lawless teens who discover a derelict Starfleet ship and use it to search for adventure, meaning and salvation.”

It is due to launch next year. Fans were also given a first look at Star Trek: Lower Deck, an animated comedy series featuring the voice talents of Tawny Newsome, Jerry O’Connell and Jack Quaid.