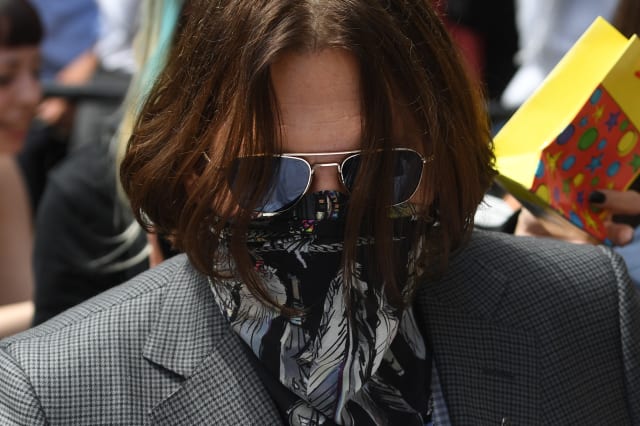 Amber Heard’s sister has claimed she “felt sick” when she learned the actress was going to marry Johnny Depp.

Whitney Henriquez said she “begged” Ms Heard, 34, not to go through with the marriage, telling her “him (Mr Depp) putting a ring on her finger was not going to stop him hitting her”.

In a written witness statement in Mr Depp’s libel case against The Sun newspaper, Ms Henriquez said when she first met the Pirates Of The Caribbean star, he seemed “very sweet” and she was “surprised how much I liked him”.

The pair became close, “like brother and sister”, she claimed, with Mr Depp, 57, calling her “sis”.

But Ms Henriquez also said her sister’s relationship with the actor was “tumultuous from the start”.

Her statement said: “I wasn’t aware of violence at the beginning, but I do remember Amber talking about them having big fights and being concerned for my sister.

“Amber told me that they would (verbally) fight – sometimes for days on end – and then go days without speaking to each other.”

Ms Henriquez said there were “other things that also worried me”, claiming Mr Depp did not like Ms Heard working and both actors would tell her about fights which began over her taking film roles.

She claimed Mr Depp would “get upset” about outfits Ms Heard wanted to wear to events and alleged he made her change into a “less revealing” dress for the Art of Elysium gala in 2014.

She alleged Mr Depp was “incredibly jealous and possessive and was threatened by her former partners and co-stars, both men and women”.

Her statement said: “I was with them in Brazil in September 2015 when they had a huge fight because she and I were leaving early so she could do a screen test for Aquaman.

“I remember his assistant, Nathan Holmes, and I joking about the fact we hoped she didn’t get the role because Johnny would go crazy when he saw a picture of Jason Momoa, her co-star.”

Ms Henriquez alleged Mr Depp was “verbally abusive, even when he was sober”.

Her statement said: “He could insult her and say he loved her in the same sentence, with equal amounts of passion. I remember him often saying ‘f****** ugly c***, you fat whore… but god I f****** love you” – and things like this.”

Ms Henriquez alleged she was often asked to intervene when the couple were fighting, earning her the nickname “the marriage counsellor”.

She claimed she “began to notice signs of physical abuse, like bruises or cuts or burns on her (Ms Heard’s) arm” and this was “early on”.

She alleged she first asked her sister about it in mid-2013, and Ms Heard “always had an excuse”.

The statement said: “I didn’t challenge her about it initially.

“We all fell in love with Johnny and he was like a brother to me.

“I didn’t want to believe that this person I loved was hurting someone else I loved.

“Later, when she was more open about it – and after she left him – she apologised to me for not being honest when I confronted her, and explained she was trying to protect him.”

Ms Henriquez’s statement later says: “Over time, I tried to intervene, telling her she had to leave.

“When they got engaged in September 2013, I felt sick about it when she called to tell me.

“I told her it was a bad idea, begged her not to go through with it and said that she should end it because it wasn’t going to get better.

“I asked her, ‘why are you putting up with this?’ and told her that him putting a ring on her finger was not going to stop him hitting her.”

Ms Henriquez claimed she confronted Mr Depp for the first time in 2014.

“Sometimes he would flat out deny it or downplay it by saying ‘No, I just pushed her, I didn’t hit her’.

“Other times, he would acknowledge that he had hit her but would try to justify it, by claiming she hit him first or ‘she called me a pussy’ and would say, ‘sis, I just lost control’.

“He blamed her for it, saying things like, ‘I just love her so much but this is what she does to me’ and never really took responsibility for it.”

Ms Henriquez also claimed she became estranged from Ms Heard for a period around 2015, after Mr Depp accused her of “selling stories to the media”.

In her statement, she said: “Amber believed him and was devastated. I was upset that she believed Johnny over me, and there was a long period in 2015 when I was estranged from Amber and Johnny because of this.

“At some point in January 2016, I sought reconciliation because I was really worried about Amber and did not want to be cut off from her. I knew I had done nothing wrong and I was angry at Johnny, but I apologised just so I could be around to keep an eye on her.”