San Diego Comic-Con goes digital in the age of coronavirus 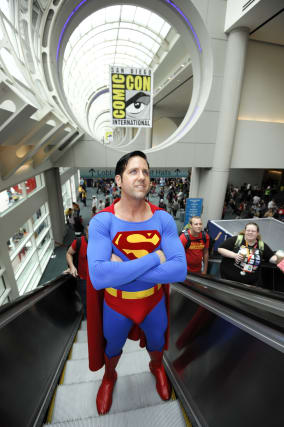 San Diego Comic-Con is preparing to boldly go where it has never gone before – into people’s homes.

For the first time in the event’s 50-year history, the annual pop culture convention will take place virtually due to the coronavirus pandemic.

Usually, about 130,000 fans would descend on Southern California for Comic-Con, which attracts some of the biggest names in entertainment for panels packed with big moments and reveals.

However, mass gatherings have been banned in a bid to halt the spread of Covid-19, cancelling the traditional convention.

Instead, Comic-Con@Home, as organisers have called it, will feature more than 350 panels, mostly prerecorded, highlighting upcoming TV shows and movies.

Some of the big names set to take part include Sir Patrick Stewart, who will be virtually joining his Star Trek: Picard co-stars to discuss the first season, and Hollywood actress Charlize Theron, who will reflect on her action movie roles.

Comic-Con stalwart The Walking Dead will have its own panel, while filmmaker Guillermo del Toro and actor Keanu Reeves are also set to appear ahead of the final day on Sunday.

As well as the panels, Comic-Con’s famous merchandise will be made available, with fans able to browse a virtual convention floor online.