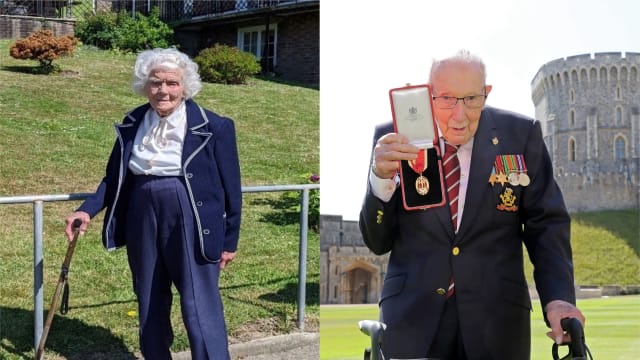 A 104-year-old fundraiser has been congratulated by Captain Sir Tom Moore, who described her efforts as “a very good job”.

Appearing on the Lorraine show on Wednesday morning, Mrs Willett was surprised with a personal message from Sir Tom and his family.

Mrs Willett, who had life-saving heart surgery 20 years ago, has spent the last six weeks walking up and down the hill outside her care home in Hastings, East Sussex.

During her challenge, her image was broadcast over Piccadilly Circus by BHF as a show of support.

She said: “The last couple of weeks have been overwhelming. They started when I saw my name and story up in lights in Piccadilly Circus in London, which the BHF had organised as a thank-you.

“I have had people from all over the world support me and now a message from Captain Tom himself.

“I just want to thank everyone, people I know and those I don’t, from the bottom of my heart for supporting me. There is so much kindness in the world and those many kind people are the reason I am here today.”

Mrs Willett said she was inspired by 100-year-old veteran Sir Tom, who raised more than £32 million for the NHS with his own walking challenge.

Tweeting further congratulations to Mrs Willett, Sir Tom said: “So delighted to hear you were inspired by my walk Joan! An incredible effort and great to hear you’re also enjoying life to the full.”

Sir Tom was knighted by the Queen last week in a ceremony he said left him “overwhelmed with pride and joy”.

Mrs Willett’s fundraising page can be found at www.justgiving.com/fundraising/joansdailyhike