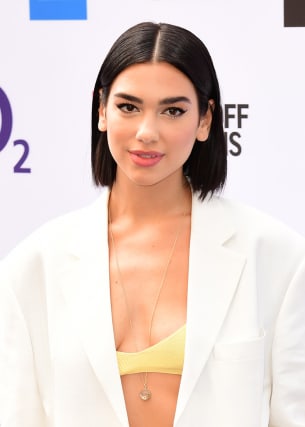 Pop star Dua Lipa has sparked fierce online debate for an image of a map she posted on Twitter.

On Monday night, the 24-year-old pop star shared a map appearing to show Albania alongside its emblem and a sentence suggesting Kosovo Albanians are indigenous to the area.

The image is often associated with supporters of Albanian nationalism.

She captioned the post: “au-toch-tho-nous adjective (of an inhabitant of a place) indigenous rather than descended from migrants or colonists”.

The map has been used by nationalists aiming to create a Greater Albania by unifying the lands some Albanians consider to form their national homeland.

Lipa was born in London to Kosovo Albanian parents and spent some of her youth living in Kosovo.

Her post came after Rita Ora, another British pop star with links to Kosovo, tweeted in support of the country appearing on Apple Maps.

She wrote: “Would love to see @Apple spreading awareness by putting Kosovo on the map! Albania and Kosovo are full of so much beautiful and great talent.”

A petition was recently launched calling for Apple Maps to show Kosovo as an independent nation and has garnered more than 131,000 signatures.

A message on the Change.org page says it is “very worrying that Kosovo is not shown on Apple Maps” and called for it to “change ASAP”.

The map in question sparked violence at a football match between Albania and Serbia in 2014 when a drone carrying the flag appeared above the stadium in Belgrade.

Albanian nationalists claim their people settled in the region long before the Serbs.

Many Serbs reject this.

Central to the dispute is the status of Kosovo which declared independence from Serbia in 2008, less than a decade after Nato’s bombing campaign helped end the rule of Serbian strongman Slobodan Milosevic.

Lipa’s tweet sparked strong reaction from both supporters and critics.

She has been vocal in her support of the Black Lives Matter movement and recently signed an open letter calling for the Government to ban LGBT conversion therapies.