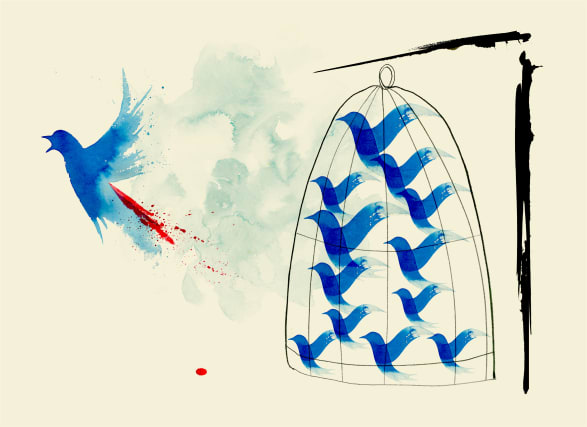 An image depicting Twitter as the “morality police” has scooped an illustration gong.

Her winning image was commissioned by Open Democracy to accompany Wael Eskandar’s article, entitled: “How Twitter is gagging Arabic users and acting as morality police.”

The image symbolises “a Twitter update that has broken free from a pencil-drawn cage only to be shot down”.

Kiernan won the Moira Gemmill Illustrator Of The Year and the Illustrated Journalism Award 2020.

The Book Cover Award went to Eva Eland for her debut picture book When Sadness Comes To Call.

The judges admired the “soft, non-threatening portrayal of sadness”.

The Book Illustration Award recipient was Clive Hicks-Jenkins for Hansel and Gretel: A Nightmare in Eight Scenes, written by Simon Armitage.

Hansel and Gretel are reimagined as modern-day refugees in the illustrated book of poems.

V&A director Tristram Hunt said: “The V&A Illustration Awards celebrate outstanding creativity by working artists, who use the fierce power of illustration to illuminate all the complexity of contemporary human experience.