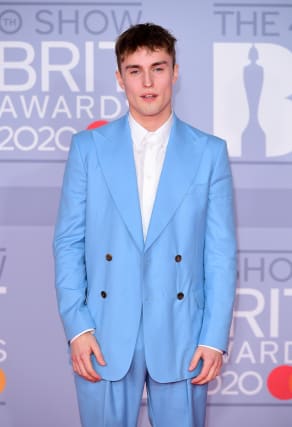 Fender, 26, and the Vossi Bop singer have been nominated in the same category for The Ivors, the annual music awards which “celebrate exceptional craft in songwriting and screen composition”.

They are nominated in the best song musically and lyrically category, with Fender nominated for his song Dead Boys and Stormzy for Crown, alongside his co-writers Jimmy Napes and MJ Cole.

They are joined in the category by Jamie Cullum, nominated for his song The Age Of Anxiety.

Fender told the PA news agency: “I’m freaking out, the fact that my song is even up there with Stormzy and that, it’s just mad.

“Stormzy is a friend as well.

“We’ve just started chatting a bit and it’s mad because we were like even sort of talking about maybe doing something together at some point.

His song Dead Boys appeared on his debut album, Hypersonic Missiles, released last year and addresses the suicide of a close friend and male mental health.

On being nominated for this song, Fender said: “It means a lot. It’s one of the more personal ones. I wrote it when one of my friends sadly took his life and I didn’t really want to release it as well. I wrote it as a reactionary thing, because to be honest music has always been the way, without sounding cliched, it’s always been the way I’ve dealt with traumas in my life.

He added: “I wrote that song two years ago or whatever and even a couple of months ago… it’s such a taboo subject and I think also as well it’s just men and feelings are, it’s still very much a problem. Blokes, kind of, because of the way we’ve been raised and because of society’s idea of what a man is supposed to be, we’re so stuck in these rigid, stupid toxic rotations.

“So I kind of, for me, I didn’t want to release it but then we all unanimously decided it had to be done and that it was a good song and we shouldn’t leave it behind and it’s actually got arguably the most meaning out of all the songs on the album. I put it out and it’s the best decision I made.”

The Ivors nominations recognise works written by British and Irish songwriters and composers that were released in the UK in 2019.

The winners of The Ivors with Apple Music will be announced on September 2.