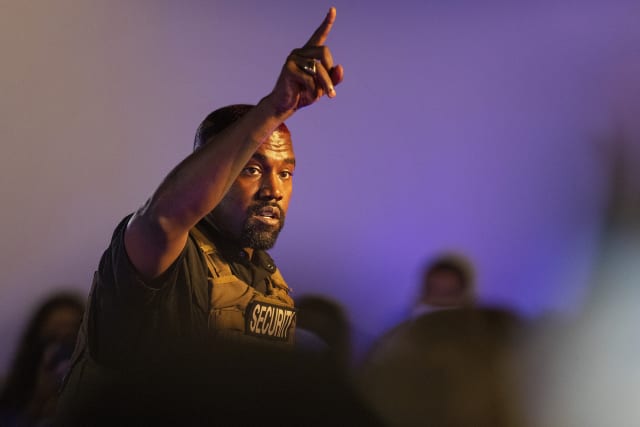 Kanye West has claimed wife Kim Kardashian West tried to get a doctor to “lock me up” after he said the couple considered an abortion while expecting their first child.

West, who says he is running to be president of the US, told a crowd in South Carolina on Sunday that a message from God convinced him to keep the baby.

The rapper, who has been open about his bipolar disorder diagnosis, has now claimed his wife tried to bring a doctor to his ranch in Wyoming, comparing the situation to 2017 horror film Get Out.

He tweeted: “Kim was trying to fly to Wyoming with a doctor to lock me up like on the movie Get Out because I cried about saving my daughters life yesterday.”

The claim was made in a series of distressing tweets in which he demanded Kardashian West and his mother-in-law Kris Jenner “call me now”.

He said Vogue editor-in-chief Anna Wintour “looked at me like I was crazy” when he told her about the deal to sell his Yeezy fashion line through Gap stores.

West also shared a picture of his four children with Kardashian West.

Reality TV star Kardashian West is yet to publicly respond.

West’s tweets came a day after his headline-making event in North Charleston, South Carolina, where he discussed his presidential bid.

The 43-year-old wore a protective vest during the event and had “2020” shaved into his head. He floated the idea of giving struggling mothers one million dollars to discourage abortions.

However, it has since emerged West has missed the deadline to appear on the presidential ballot in South Carolina.

He did not submit a petition of 10,000 signatures by noon local time on Monday and would therefore not appear on the ballot, a state official said.

South Carolina State Election Commission spokesman Chris Whitmire said: “The deadline has passed for any candidate to submit a petition for the November 3, 2020, General Election. Kanye West did not submit a petition.”

While he missed the South Carolina cut off, Fox News reported he made the Illinois deadline to file as an independent candidate.

West is from Chicago and Illinois is his home state. Fox said an Illinois State Board of Elections spokesman confirmed representatives for West filed 412 petition sheets and officials would count the signatures to check if they amounted to the 2,500 needed for a place on the ballot.

West, a rap superstar, billionaire and fashion designer, announced his White House bid in a tweet on July 5, though doubts persist over how seriously to take his tilt at the top job.

Last week, he qualified to appear on Oklahoma’s presidential ballot, the first state where he met the requirements before the filing deadline.

However, that deadline has passed in several states.

West drew sharp criticism for his comments during Sunday’s event about Harriet Tubman, one of the most revered figures in US history.

Tubman was a 19th century abolitionist who led slaves to freedom. West said the Underground Railroad conductor “never actually freed the slaves, she just had them work for other white people”.