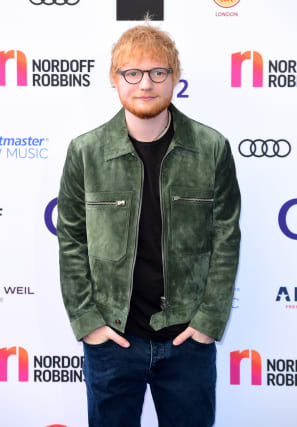 Ed Sheeran, Helena Bonham Carter, Liam Gallagher and Carey Mulligan are among the stars to have donated items and experiences to a charity fundraiser for children living in war zones.

War Child is aiming to raise £300,000 during its six-week Emergency Coronavirus Crowdfunder.

The bands Coldplay, The 1975 and Elbow have also contributed.

A tea party with The Crown stars Bonham Carter and Kirby, a meet-and-greet with singer Sheeran, and the opportunity to have brunch with actress Mulligan and watch a screening of her new film are among the experiences which are up for grabs.

Mulligan, who is a global ambassador for War Child UK, said: “Working with War Child over six years has shown me not just the hardships that children in war-torn countries face every day, but the amazing resilience they hold in times of devastation.

“With Covid-19 causing restrictions on the aid we can bring, War Child’s Emergency Coronavirus Crowdfunder is essential in bringing resources to children in conflict zones who are facing this new and deadly threat.

“The positive support I have received from peers to contribute to this campaign has been overwhelming and I am so grateful to anyone who can join us in raising these crucial funds.”

More items and experiences will be announced halfway through the campaign.

War Child UK chief executive Rob Williams said: “The impact of coronavirus has been felt around the world, but in the communities where War Child works this is an emergency which could yet prove to be the world’s most deadly humanitarian disaster.”

He added: “As we are beginning to beat the virus in the UK, it is crucial to support vulnerable children whose futures hang in the balance and the funds raised from this campaign will help us ensure we can reach as many children as possible to provide the support they so urgently need.”

– The items will be on sale online between now and September 1.