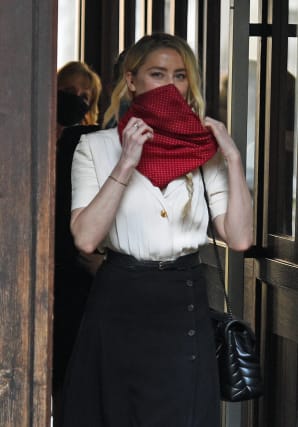 Amber Heard has insisted that accusations she regularly uses drugs are “just not true”.

She said she is not a “habitual drug user” and that while she does drink wine, she does not like to get drunk.

The Aquaman actress also dismissed allegations that she married Johnny Depp, 57, for money, or to further her career, as “preposterous”.

Ms Heard, 34, is giving evidence in her ex-husband’s libel action against The Sun newspaper over a 2018 article that labelled him a “wife beater”.

In a witness statement submitted to the court, Ms Heard addressed allegations about her own drink and drug use.

She said: “Johnny says I often drank more than him, and that I am a regular/heavy drug user.

“That’s just not true, although of course I drank more than him during the brief periods when he was sober.

“If he was sober, then to be respectful, I would usually check with him that it was OK for me to drink wine in front of him.

“He would say yes and often insisted on pouring my wine.”

She added: “I am not a habitual drug user.

“During our relationship I would say that I could count the number of times I attempted to smoke marijuana on two hands.

“I am not a personality that likes to be out of control.

“I did not take cocaine at all when I was with Johnny.

“I have taken MDMA or mushrooms a handful of times with friends.”

Ms Heard said she was prescribed Provigil in her 20s as she was “having a hard time with sleep” and it was causing problems with her work schedule, and she takes it “to this day in the prescribed dose”.

The statement also says: “I do like to drink wine, but I don’t like to get drunk.”

“It also says: “I rarely drink to an extent that would get me past what I would characterise as ‘tipsy’”.

In the statement, Ms Heard also said that it was “preposterous that I could ever have encouraged Johnny to drink or take drugs”.

“It was in my self-interest to advocate for and to support and protect his sobriety,” she said.

“To this end, I spent years trying to support him to get sober to help him and to save our relationship.”

Ms Heard went on to say she “did not lie about his (Mr Depp’s) drinking or drug use”.

She wrote: “Frankly there was no need to lie, it was clear to everyone around him that he was doing drugs and drinking and he himself invited medical intervention to address it.”

Giving evidence to the High Court this morning, Ms Heard was asked by Eleanor Laws QC, representing Mr Depp, about the claims in her witness statement that she “wouldn’t take cocaine at all when you were with Mr Depp” nor would she “drink to excess”.

Ms Laws said: “I suggest that they are all lies… every one of those assertions by you is a lie, isn’t it?”

Ms Heard said they were not.

Ms Laws asked Ms Heard to a medical note written by a nurse, Erin Boerum, who wrote that Ms Heard had “a history of anxiety” and had suffered from an eating disorder and ADHD.

The note also said: “AH reports a history of substance abuse, including addiction to cocaine and liquor.”

“This is all completely untrue.”

She went on to say: “As for what Johnny says about my so-called ‘agenda’ in marrying him, for financial benefit or to somehow further my career, that is preposterous.

“I remained financially independent from him the whole time we were together and the entire amount of my divorce settlement was donated to charity.”