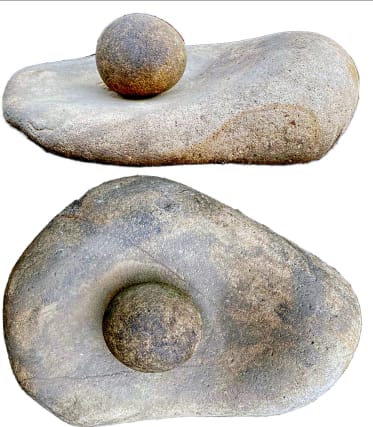 Lockdown has sparked a spate of archaeological finds – from Neolithic arrowheads to post-Medieval belt hooks – in back gardens.

While metal-detecting was prohibited for several weeks, an array of objects surfaced from under lawns, as people spent time pottering around in their gardens “digging up their flowerbeds”.

Experts have urged gardeners not to feel embarrassed about checking whether their discoveries, from rocks to pipe bowls, are significant.

Peter Reavill, a finds liaison officer, told the PA news agency: “With so many people spending so much more time in their gardens, there have been some really interesting finds…

“I’ve seen some tobacco pipes, some pieces of pottery and even prehistoric flint tools found in people’s gardens.”

Fossils “found when people have been digging flowerbeds” were sent to Reavill’s local museum, in Shropshire.

While they may not be valuable treasure, they often say something “very interesting about the local  history”, he said.

“People find stuff all the time, and put it on one side and say, ‘That’s interesting, I’ll do something with that’.

“But they’ve had the time now to get in touch and say, ‘I found this. What is it?’

“And that’s one of the benefits of lockdown  – people have had time to consider where they are and who have gone before them – most importantly they have had the time to get in touch with their discoveries.”

Objects discovered in gardens during lockdown include a post-Medieval snake-formed belt hook in Herefordshire.

A Medieval silver coin was discovered in a garden in Stoke-on-Trent, Staffordshire, and a rock with script, thought to date from the 4th Century, in Coventry.

A quern used to grind grain from the Neolithic or Bronze Age period was found near Bradford, West Yorkshire.

Eight fragments of Roman greyware pottery were unearthed in Wymeswold in Leicestershire and a Neolithic arrowhead in Chithurst, Sussex.

Michael Lewis, head of portable antiquities and treasure at the British Museum, said: “During the period of total lockdown, a number of garden finds have come to light as people have been digging their gardens whilst off work or unable to go out as much as usual.”

He told PA: “Finders can be shy about showing Finds Liaison Officers their garden finds, but we are keen to see what is discovered by the public.

“Often people don’t realise the archaeological significance of what they find”.

They are urged to notify the British Museum’s Portable Antiquities Scheme about the objects which help experts and the public learn about the past.

“Most finders get to keep their discoveries,” Mr Lewis said.

Nothing in lockdown has been unearthed which is as spectacular as the 80 US dollar gold coins found in a back garden in Hackney, East London, in 2007.

Other discoveries from previous years include, in 2012, a gold lovers’ ring discovered in a chicken run in Shropshire after the hens had been scratching for worms, and a late Medieval iconographic ring found on top of a molehill on a garden lawn in Herefordshire.