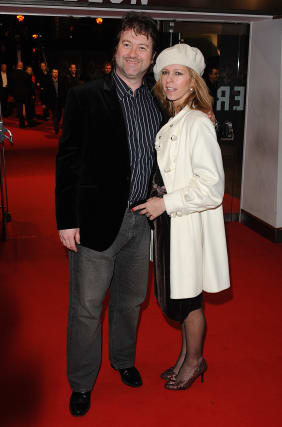 Kate Garraway has said it was “emotional” celebrating her son’s birthday without her husband Derek Draper but said she knew he would be “proud”.

Draper is still in hospital after he was admitted three months ago with coronavirus.

She has said doctors are no longer keeping the 52-year-old in a coma, but that “he sort of can’t wake-up”.

Garraway celebrated her son Bill’s 11th birthday in the garden of their London home with the help of her friends Myleene Klass and Roman Kemp.

She wrote on Instagram: “So I was super nervous about Bill’s birthday this year – we usually have a family do with grandparents & a few of his friends but obviously this not possible.

“So we are seeing grandparents separately but wanted to do something for him & his mates in the garden. Derek is so brilliant at this, organising treasure hunts & boys own adventures so mentioned to @myleeneklass really didn’t want to let Bill down & did she know anyone with a tent we could borrow in case it was wet.

“Little did I know what I was unleashing! She is in her element! At 8.30 this morning she arrived with Apollo in tow to supervise the brilliant @sleepyteepeeuk to set up the most amazing jungle camp ever!!! ….”

Sharing a video of Bill exploring the teepee, which was set up for a sleepover, she wrote: “When Billy woke up he could not believe his eyes!!!! Thanks @sleepyteepeeuk & @myleeneklass and the fabulous @ariannemerry … feel so emotional but know Derek will be so proud and pleased. Can never thank you enough.”

Garraway also shared a video of Kemp, dressed in his I’m A Celebrity…Get Me Out Of Here ensemble, taking part in a water pistol fight in the garden.

She wrote: “And what’s a #jungle camp without a surprise visit from an @imacelebrity star?! Cue @romankemp surprise arrival – who do you think is loving the #nerf war the most??!!!

Garraway also revealed the day nearly ended in disaster as they woke up with no running water, and she was helped out by Judge Rinder.

Sharing a video of Kemp lighting sparklers on Bill’s Fortnite cake, she paid special tribute to the TV star.

She wrote: “Also @judgerinder for when I woke up this morning to find had NO WATER , not even a toilet flushing , instantly scrambled into plumbing action. Consider yourself seriously happy birthdayed Billy!!!”