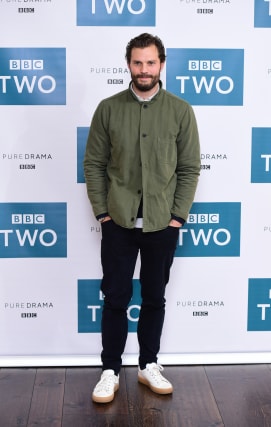 Jamie Dornan has revealed he uses show tunes as the soundtrack to his exercise routine.

The 50 Shades Of Grey star shared a video of himself working out with a kettlebell, to the sound of Dancing Queen by Abba from the show Mamma Mia.

He wrote: “If you don’t workout listening to songs from musicals you’re getting it ALL wrong.”

In the video he can be seen performing bent-over rows in time to the music, before he looks into the camera at the end.

The actor has been giving fans an insight into different aspects of his life during lockdown.

He previously shared a photograph of himself in a dress and high heels, wearing a blue wig, and wrote: “Dressing up with my daughters took a turn. Meet Jenny (with the blue hair). She’s sweet.”

He also posted a photo of himself playing Twister alone as he celebrated his 38th birthday.