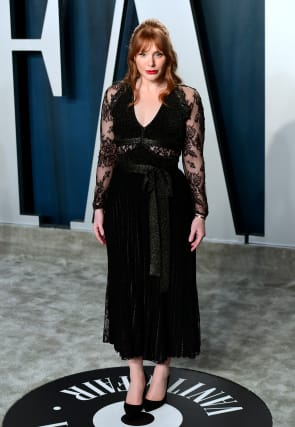 Bryce Dallas Howard has revealed the physical toll that stunt work for the latest Jurassic World movie has taken on her body.

The actress, 39, is in the UK filming Jurassic World: Dominion alongside her fellow Hollywood star Chris Pratt.

The production resumed earlier this month at Pinewood Studios near Slough, as studio Universal kicked back into gear following the pandemic-enforced lockdown.

And Dallas Howard has proudly revealed the painful-looking bruises sustained while filming her stunts for the movie.

She tweeted pictures of bruises on her arms and legs, writing: “Raise your hands if you’re happy to be doing stunts again!!”

And the stunts were not the only source of pain for the actress. Alongside a picture of her and Pratt smiling on set, she wrote: “These past couple of weeks my abs have been sore from laughing so much — it’s good to be back at work with this funny guy.”

Jurassic World: Dominion was reportedly four weeks into its 20-week production when filming paused in March.

Production resumed with a host of safety measures to protect the cast and crew.

He said: “They invested all their heart and soul and a lot of money into making sure that we’re safe.

“I won’t bore you with the details, but we’re all going to be quarantined in a kind of a bubble, all the crew and all the cast. And testing and everything.”

Jurassic World: Dominion is set for release in June 2021.