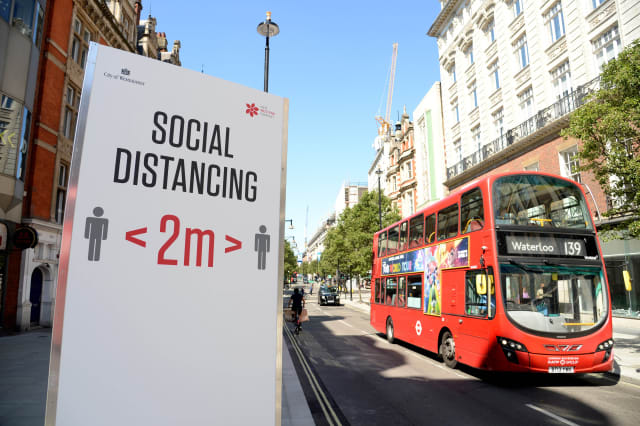 More than 50,000 jobs could be at risk in London’s West End if tourists and office workers do not return, a partnership representing the area has warned.

In the first full month since the reopening of non-essential retail on June 15, some 5.1 million people visited the West End – down 73% year-on-year for the same period, the business partnership said.

It has now called on the Government to provide clarity about whether people should return to their offices, as many retailers rely on the lunchtime trade.

Jace Tyrrell, the New West End Company’s chief executive, said that without consumers having the confidence to travel and visit, the situation was “highly precarious with 50,000 jobs at risk”.

He said: “With no international visitors and mixed messaging surrounding the safety of returning to work and using public transport, we urgently seek clarity of Government messaging for our businesses to survive.”

The partnership said London was “faring worse” than the rest of the UK, despite footfall increasing in the West End – which is home to many of the capital’s major tourist attractions – by 5% since the reopening.

Figures from retail expert Springboard show footfall on the UK high street is down 57.2% compared with June 2019.

Meanwhile, footfall in the UK’s regional cities has dropped 70.4% compared to the same period last year, while in central London it was down 76.2%, Diane Wehrle, insights director at Springboard, said.

The partnership said “long-term” measures were needed to boost business when international visitors eventually return to cities in larger numbers.

It said 70% of all international visitors are from EU member states but are excluded from the tax-free shopping scheme.

By including them in the scheme as part of any future trade deal negotiations with EU countries, a further £1.4 billion could be generated in retail sales annually, the partnership claimed.

Mr Tyrrell added: “With the UK-EU trade deal deadline also looming, we need to ensure that destinations that rely on international visitors, which have been so hard hit by the pandemic, are accounted for in longer-term recovery plans including levelling up on tax-free shopping with the EU.”

The New West End Company said without further Government action, and a lack of domestic and international tourists and office workers, there could be a “£5 billion loss in sales, putting over 50,000 jobs at risk”.