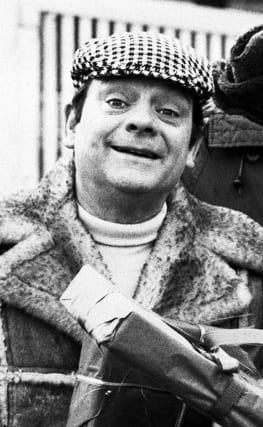 Del Boy falling through the bar during a classic episode of Only Fools And Horses is the nation’s most memorable TV moment, a survey has found.

Researchers polled TV fans to discover the dramatic scenes, cliffhangers and laugh out loud moments that have captivated the country’s viewers.

It comes ahead of this month’s Bafta TV Awards, which feature the Virgin Media must-see moment category.

Sir David Jason’s Del Boy taking a tumble after telling Trigger to “play it cool, son” ranked number one, with 39% of the vote.

This was followed by Susan Boyle’s Britain’s Got Talent audition on 27%, when she stunned a sceptical judging panel and audience with her performance of I Dreamed A Dream from Les Miserables.

In third was Den “Dirty Den” Watts handing his wife Angie divorce papers on EastEnders, with 26% of the vote.

The Dallas who shot JR mystery came in fourth. Also in the top 10 were Sir David Attenborough meeting mountain gorillas while filming Life On Earth, the soldiers going “over the top” into German gunfire on Blackadder Goes Forth and Rachel getting off the plane to return to Ross in the Friends finale.

The study of 2,000 viewers was commissioned by Bafta TV Awards sponsors Virgin Media ahead of the ceremony later this month.

The survey also found more than half of those asked have been watching TV as a family more since lockdown.

And the data suggests people from Cardiff are the nation’s biggest TV lovers, watching 27 hours a week.

David Bouchier, chief TV and entertainment officer at Virgin Media, said: “We’ve witnessed some of the most memorable TV moments ever on our screens, and it’s no surprise that many of Britain’s classic shows feature in our nostalgic poll.”

The Bafta TV Awards are set to take place on July 31.