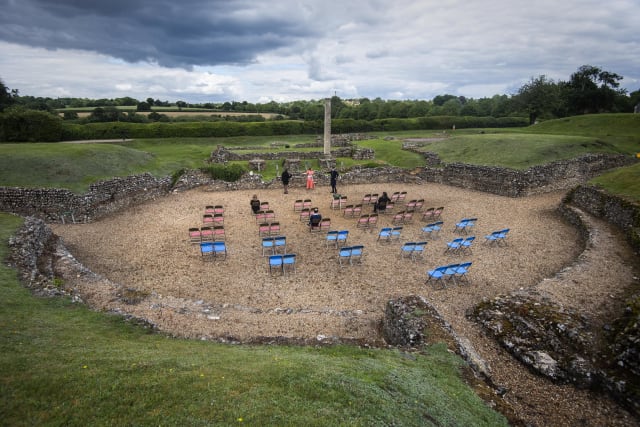 Visitors to the open air Roman Theatre in St Albans will find socially-distanced seating, staggered arrival times and no interval to avoid queues for toilets when performances resume.

Outdoor performances of theatre, opera, dance and music will be able to resume from Saturday, provided social-distancing measures are in place.

However, singing and playing wind and brass instruments have been designated “higher risk” activities in the Government’s new coronavirus guidance for the performing arts industry, and performances at indoor theatres are still not permitted.

The Roman Theatre of Verulamium will only seat 220, instead of the usual 275, when shows resume – and the audience will be further back from the stage than normal to avoid the potential spray from projecting performers.

Adam Nichols, artistic director of the Maltings Theatre – which will stage The Merry Wives Of Windsor and Henry V at the outdoor theatre next month, told the PA news agency: “The fortunate thing about that venue is there are different levels, almost like a conventional playhouse so will have what are like stalls down at the bottom, then a dress circle on some grass mounds and then an outer grass bank which will be almost like an upper circle.”

All seating will be in pairs, with a metre gap surround each set and performers will sing side by side in compliance with Government guidance.

Nichols said: “The stage area will be quite large so we can actually get the actors reasonably distant from each other and the style of music we are using in the musical show (The Merry Wives Of Windsor) is a belt-it-out type of 80s rock songs, so from a theatrical point of view them standing on their own and performing will work within the setting.

He added: “We are gong to have loos for staff and cast and there are public toilets near to the venue, but we are not going to have intervals so we are trying to minimise that, partly because of cleaning but also because of queuing and the time that it would take to get people through the loos, so we are going go straight through, no interval.

“We are still discussing if we can do the bar safely. We are looking at what the open air cinemas are doing because obviously you don’t want lots of people gathering at a bar to be served, so we are looking at the possibility of pre-ordering and serving people at their seats.

“We are going to give people timed arrival times but leaving is obviously the challenge because everybody’s leaving at the same time, so we are going to manage that with our front of house team so that we let people go a row at a time effectively.”

The Merry Wives Of Windsor and Henry V will run at the Roman Theatre in St Albans from August 14-31.