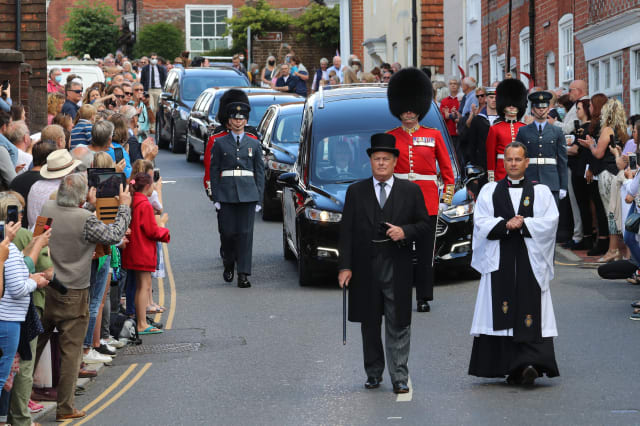 Dame Vera Lynn has been honoured with a flypast in her beloved East Sussex village ahead of her funeral.

The aircraft made three passes over the quiet village before leaving to applause from the crowd.

The adored singer, who entertained troops with morale-boosting visits to the front line during the Second World War, died aged 103 on June 18.

As a cortege bearing Dame Vera's coffin – which was draped in a Union flag – made its way out of the village where she lived for 60 years, there were shouts of "hip hip hooray" from the crowd in her honour.

It was followed by a spontaneous rendition of We'll Meet Again, one of the songs Dame Vera was well-known for.

The cortege arrived in the centre of Ditchling as a bell tolled.

Applause from the crowd greeted the convoy, which was led by soldiers.

Hundreds of people gathered at the crossroads in Ditchling ahead of the arrival of the funeral cortege.

Representatives from the Royal British Legion stood in the road with flags as they waited to honour Dame Vera.

A small police presence is on hand to ensure proceedings go smoothly.

Ahead of the day, a giant portrait of the Forces Sweetheart was beamed onto the White Cliffs of Dover to commemorate her life.

Virginia Lewis-Jones, Dame Vera's daughter, said: "We want to thank everyone for their tremendous support over the past few weeks.

"My mother always appreciated receiving messages from all over the world, and Ditchling was always particularly special to her, that is why we know she would be touched that so many people want to pay their respects."

He told the PA news agency how he met the Forces' Sweetheart at a re-enactment in a marquee surrounded by veterans.

Mr George said: "We had a group photograph with Dame Vera, we were all gathered round her dressed as the different generals.

"She was wonderful, absolutely wonderful, she had time for everybody... It's the end of an era. But she will never be forgotten."

Avril Gaynor, who first met Dame Vera Lynn when she was 10, told PA that the Forces' Sweetheart changed her life.

She said: "It's so sad, but I am glad she is getting a big send-off – to put it mildly.

"She was a wonderful, wonderful lady and I am so pleased that so many people want to come to pay tribute to her."

Remembering her visit to troops in Burma, the Second World War veteran and NHS fundraiser told ITV's Good Morning Britain: "There she was, this lovely English girl... she was a great person to give us a lot more confidence and we were very, very pleased to see her."

"She was always so kind, she was lovely, I've always had a soft place in my heart for Dame Vera. It was very sad when she died."

After leaving Ditchling, the cortege will move on to the crematorium in Brighton where a tri-service route-lining party will wait outside the chapel, together with a military bearer party ready to receive the coffin.

A bugler from the Royal Marines will provide a musical tribute inside the chapel, and the Ministry of Defence will be represented by a senior officer who, along with the bugler and the small family group, will be the only people to attend the funeral service.