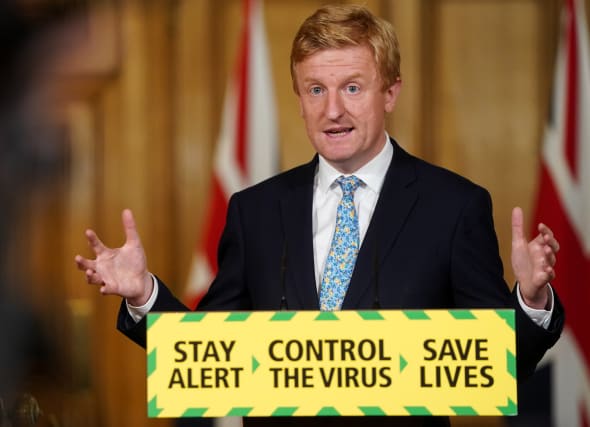 Culture Secretary Oliver Dowden has said he feels “let down” by the BBC over its decision to end the free TV licence for over-75s.

Speaking at the Downing Street coronavirus briefing, he said people “up and down the country” would feel the same way about the BBC’s move to begin means-testing in August.

The new scheme was originally meant to start on June 1, but was delayed and kept under review because of the coronavirus pandemic.

The BBC has said that continuing the universal entitlement would hit “programmes and services”.

Mr Dowden said: “I very much regret the decision that the BBC has taken.

“They said that it was a good settlement, and I regret that they couldn’t find efficiency savings in order to avoid having to impose the licence fee on the over-75 in the way that they have set out.”

He added: “I feel let down that the BBC haven’t funded this.

“I’m sure people up and down the country will feel let down that they haven’t funded it.

“Our manifesto said we thought that they should fund it, I’ve made that position clear to the BBC and I’ve not changed my mind on that.”

He also confirmed a consultation into decriminalising the licence fee would see the results published in the summer.

BBC chairman Sir David Clementi said that “implementation of the new scheme will be Covid-19 safe”, adding the “BBC could not continue delaying the scheme without impacting on programmes and services”.

Over-75s who receive the free TV licence, which costs those who pay £157.50, will have to receive pension credit.

“Critically, it is not the BBC making that judgment about poverty.

“It is the Government who sets and controls that measure,” Sir David said.

The BBC has been under “severe financial pressure due to the pandemic”, he added.

He went on: “I believe continuing to fund some free TV licences is the fairest decision for the public, as we will be supporting the poorest, oldest pensioners without impacting the programmes and services that all audiences love.”

“This is the wrong decision.

“We recognise the value of free TV licences for over-75s and believe that they should be funded by the BBC,” the spokesman said.

The Conservative MP said: “This mess is a result of a poor decision struck by the outgoing director-general and now Britain’s pensioners are having to pick up the cost.”

The “Government cannot absolve itself of responsibility for the upset and distress being caused to many of our over-75s today”, she said, adding: “The sadness is that these older people have already endured so much over the last few months.”

She continued: “We’re bitterly disappointed by this decision on behalf of the millions of over-75s who have had a torrid time over the last few months and for whom this must feel like another kick in the teeth, during a terrible year.”

The charity is worried about the “mental health of older people living on their own”, and those for whom “the TV really is their window on the world”.

The BBC said safety would be at the “heart” of the scheme, as “no-one needs to take any immediate action, or leave their home, to claim for a free TV licence or pay for one”.

The BBC first announced the end of the universal entitlement last year, in a move which provoked a swathe of criticism from the likes of Dame Helen Mirren and former prime minister Gordon Brown, who said: “Costs should be covered by the Government.”

The BBC has launched a programme of voluntary redundancy as it attempts to make £125 million in savings this year, on top of the previous £800 million savings target, due to the pandemic.