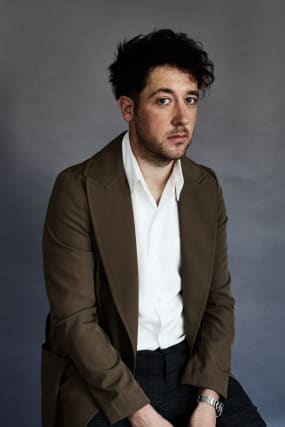 The Wombats frontman Matthew “Murph” Murphy has said that lockdown with his wife, one-year-old daughter and two dogs has been a “wild ride”.

Liverpudlian Murphy, who is releasing his debut solo album as Love Fame Tragedy, moved to Los Angeles with his wife Akemi in 2016 before welcoming baby Dylan.

The 35-year-old, who also owns an American bulldog, said his Rottweiler-Doberman cross had had to undergo knee surgery during lockdown.

“One of them had to have ACL surgery in the midst of this.

“So we’ve got to put a fence around him and he’s 120lbs and he has got so much energy, but we’ve got to keep him sedated and make sure he doesn’t hurt his knee.

“And obviously having a one-year-old on a sleeping regime then me trying to write and exercise and not drink too much wine and not get too fat – and just generally deal with everything that is happening in the world at the moment.

“It’s been a wild ride. And it’s been amazing in many respects.

“I haven’t struggled with getting songs out.”

He also recalled the challenges of working from home with a child, saying: “Any moment we turn away from her, she starts getting into something ridiculous.

“I don’t know how she has this drive towards all these dangerous things but that’s what she does.”

Murphy recruited a number of stars including Pixies’ Joey Santiago, The Killers’ Mark Stoermer and Bastille’s Dan Smith to work on his debut solo album, which is titled Wherever I Go, I Want To Leave and was recorded between Los Angeles, London and Sydney before the pandemic.

It comes after two well-received EPs released in September 2019 and March 2020.

He described single 5150, named after the code used in California law to protect individuals who present a danger to themselves, as a reflection of his own “impulsive” behaviour.

He said: “I thought it was a cool title and I thought I could apply it to my own life in some respects.

“It’s the life of trying to juggle being in a band and family.

“It’s a triangle of struggle really, being a father but also being in a band, then also my own shit I have to deal with.

“I have been reckless in the past, and probably will be a bit in the future, just trying to wrangle all these things together and get them so they all work in harmony together.

“I definitely feel more balanced now but then new things come along to throw you off, I think.

“I guess the song is about impulsive behaviour and trying to tone that down.”

Murphy said recording without The Wombats allowed him to focus on the song rather than their egos.

“I tried to enjoy the recording processes as much as I possible could and didn’t massively overthink too much,” he said.

“And talked more about what the song needs rather than three egos in a room trying to get their own piece of the cake, which is inevitably what happens when you have been in a band for a long time.”

Wherever I Go, I Want To Leave by Love Fame Tragedy is out on July 10.