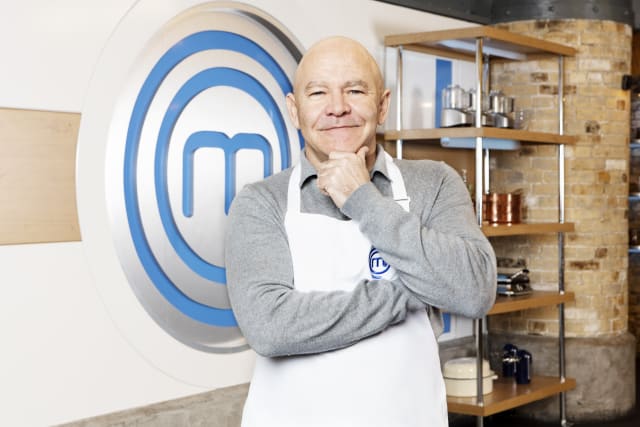 Wednesday’s episode of the BBC One show saw the TV regular, 55, and hockey player Sam Quek sent to an Indian restaurant where Littlewood was tasked with making naan bread.

After failing to get the dough to stick to the outside of the tandoor-style oven, he called the restaurant’s chef over for a helping hand.

However, the chef quickly realised that Littlewood had dropped the kitchen’s plastic timer into the oven and it was melting on the hot surface.

As they pulled the timer out it burst into flames, prompting Littlewood to say: “Let’s be honest, chef, this is going spectacularly wrong.”

After, he added: “I’ve burnt my hand, I’ve cremated about six naan breads out of eight and also cooked a timer.

“It doesn’t seem to be getting any easier.”

One viewer said: “Dom Littlewood cooking a garlic naan on Celeb MasterChef needs to be nominated for a Bafta.”

Another said: “Dom Littlewood dropping his timer in a fire pit on Masterchef is nothing short of TV Gold.”

“Dom, come in your times up,” a third quipped.

One viewer added: “Watching @DomLittlewood accidentally melt a plastic timer on @MasterChefUK has to be the highlight of my lockdown.”

Before the programme aired, Littlewood said on Twitter: “Getting ready for a lotta stick tonight after Masterchef.”

Despite his mistake Littlewood impressed judges Gregg Wallace and John Torode enough with a rice dish presented inside a pineapple to save himself from elimination.

Instead, RuPaul’s Drag Race UK star Baga Chipz was axed from the show after failing to wow the judges with her fish and chips.