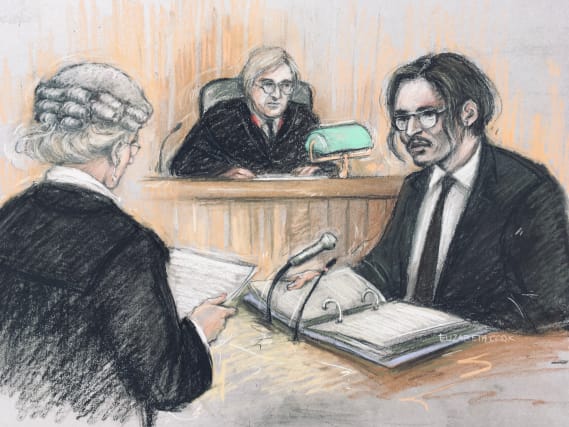 Johnny Depp allegedly “screamed obscenities” at his ex-wife on a flight to Los Angeles, as he accused her of an affair with actor James Franco, the High Court has heard.

Mr Depp denied attacking Amber Heard, 34, on the plane from Boston in May 2014, and said allegations that he shouted at her about “getting f*****” with the actor were “quite a stretch of her imagination”.

The so-called “Boston plane incident” is one of 14 alleged incidents of domestic violence, all denied by Mr Depp, relied on by News Group Newspapers (NGN) in their defence against the actor’s libel claim.

Cross-examining Mr Depp, 57, about the incident on Wednesday, Sasha Wass QC, barrister for NGN  put it to Mr Depp that he was “screaming obscenities” at Ms Heard on the plane and shouted at his ex-wife about “her getting f***** with James Franco and you were talking about how she liked getting f***** on set and you were making vulgar references to her genitals”.

Mr Depp said: “That is quite a stretch of her (Ms Heard’s) imagination.”

Earlier, she had asked the Hollywood star if he was “under the influence of first alcohol and then drugs before you got on the plane” to which he said he did not recall if he had been drinking or taking drugs.

Ms Wass then suggested that Mr Depp was “spoiling for a fight”, to which he said: “I don’t know why you would say that.”

She put it to him that he “brought up the subject of her co-star James Franco”, which he said he did not remember.

Ms Wass then said: “James Franco was a subject you felt quite strongly about.”

Mr Depp said: “I suspected that Ms Heard was having an affair with Mr Franco and it has since been confirmed that she was.”

Ms Wass replied: “She wasn’t having an affair at this time, was she?”

Mr Depp said: “I believe that she was.

“I have been told that she was.”

Later on in her cross-examination, Ms Wass told the court that during the flight, Ms Heard moved seats away from Mr Depp a number of times, before he “started by throwing ice cubes at her” and “kicked one of the chairs so hard that it swivelled round and hit her”.

She added: “You were in a blind rage, demanding to know how much she liked getting off with James Franco and you were so angry … you slapped her across the face in front of everyone.”

Mr Depp denied that that happened.

Ms Wass continued: “And you called her a go-getter slut and a whore.”

The actor said he asked for an oxygen tank “just as a lark”, adding: “I wasn’t abusing a drug, I was breathing oxygen.”

Ms Wass also suggested Mr Depp “eventually went to the toilet of the plane and you passed out”.

Mr Depp said: “As Ms Heard was berating me, screaming at me and whatnot, as is her wont, she began to get physical.”

He added that he “grabbed a pillow from the couch and slept on the bathroom floor”.

UK excess deaths during Covid-19 outbreak down by 1,500