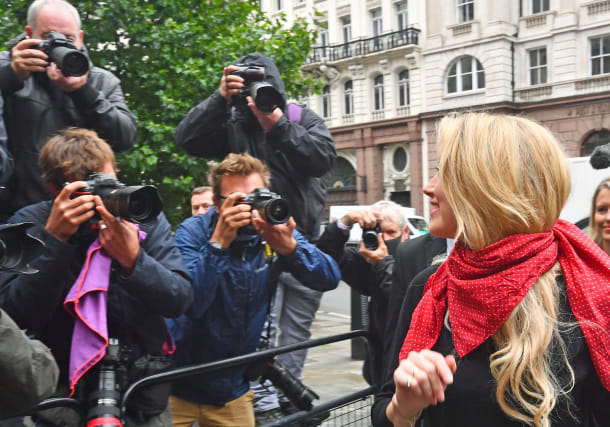 Amber Heard told Johnny Depp she had seen “our love slaughtered right in front of my eyes” after the Hollywood star allegedly “screamed obscenities” and “slapped her across the face” on a private plane to Los Angeles, in text messages read out at the High Court.

Mr Depp, 57, denies attacking Amber Heard, 34, on the flight from Boston in May 2014, and said allegations that he shouted at her about “getting f***** on set” by actor James Franco were “quite a stretch of her imagination”.

The so-called “Boston plane incident” is one of 14 alleged incidents of domestic violence relied on by News Group Newspapers (NGN) in their defence against the actor’s libel claim.

Shortly after the incident, Ms Heard texted Mr Depp, who forwarded it to his sister Christi Dembrowski, with the message: “She finally sent me a text. I will not respond. At least, not in text and not right away.”

Ms Heard’s full text to Mr Depp said: “There are so many things to say. I feel like there aren’t enough words in the world to articulate what I want to say to you.

“All I can say is that I am heartbroken. My whole world came crashing down on me. I feel so lost.

“But I know this: I love you. More than I’ve ever loved anything. I know you’re my one. My life’s true love.

“Fact remains: I can’t imagine my life without you. And the inescapable truth is being with you has been the best thing to happen to my life.

“But only you have the ability to take it all away from me – from both of us.

“I know you have a sickness – I know you’re suffering. Johnny, I’d do anything to be able to take that away from you. If only I could.

“We have such a beautiful life. Love so thick that we could swim in it. Yet it can all be lost so quickly.

“I love you. You’re my Steve. (The court heard the pair referred to each as “Steve” and “Slim” after the characters played by Humphrey Bogart and Lauren Bacall in the film To Have And Have Not).

“But there is this man, this other part of you, a shadow that exists in that hole in you … that you understandably try desperately to treat/fill/fix.

“And that’s the part, the demon, that is killing us. And that’s what I’m afraid of.

“Seeing such a beautiful thing as our love, slaughtered right in front of my eyes and not being able to do anything about it.

“That’s what/who I am running from. That demon.

“Because despite how much I’ve tried to fight him off you, he has been winning you.

“I’m scared, Johnny. So scared. I watch as this thing steals my life out from under me.

“He steals my man from me and replaces him with something terrifying and unrecognisable.”

On Wednesday, the court also heard messages between Ms Heard and Mr Depp’s former personal assistant Stephen Deuters sent after the flight landed in LA, in which Mr Deuters said: “There feels like a sea change in him this morning.”

But Ms Heard replied: “Yes, but I don’t know how to be around him after what he did to me yesterday.

She added: “He’s done this many times before. Tokyo, the island, London (remember that!?), and I always stay.

“Always believe he’s going to get better – and then every three or so months, I’m in the exact same position.”

In messages to Mr Depp’s sister, Ms Heard said of the couple’s relationship: “Great. Perfect. Heaven. Until he decides to use.

“And the drug abuse (all prescription meds) and drinking has been slowly climbing every day.

“And we’ve been fine, except when there’s any hiccup or issue or problem.

“Then s*** hits the fan. Because he doesn’t deal with it as Johnny, he deals with it as a totally different person. A demon. Who I do not recognise.

“I wish you could have seen him yesterday. It was the worst I’ve ever seen him.

“I think it’s because he’s now taking Adderall on top of all the other s***.

“Which is the equivalent to consuming a pharmaceutical speed ball everyday.

“He will die if he continues to call ‘being sober’ just not drinking.

“And his medicine kit includes tons of (new) drugs.

“He’s going to kill himself, Christi.

“I’d rather suffer without the person I love if he gets better, than to lose him by overdose.

“Plus, what happened yesterday was awful. The worst yet. I can’t even explain it.”

Expanding the shielding scheme not actively being considered – Jenrick

TikTok and The Weeknd team up for virtual concert

Marc Maron opens up about the death of girlfriend Lynn Shelton

Ex-'Ellen DeGeneres Show' employees say there was a culture of 'rampant sexual misconduct,' according to new report