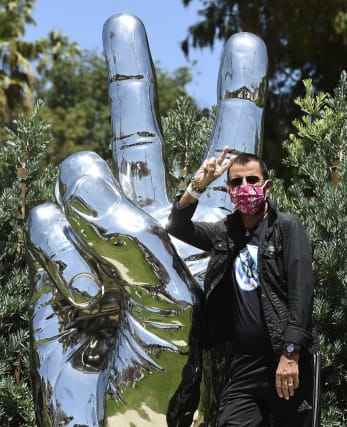 Sir Ringo Starr celebrated his 80th birthday with a livestream featuring some of his famous friends.

The former Beatle usually marks his birthdays with a public get-together in Hollywood but was forced inside by the coronavirus pandemic.

He hosted an online event – from behind his drum set – with cameos from the likes of Elvis Costello, Dave Grohl and Sheryl Crow, who performed Beatles and Sir Ringo covers from home.

And there were a number of throwback moments from Sir Ringo’s concerts of years gone by, including a performance of Helter Skelter with Sir Paul McCartney.

Sir Ringo reflected on how the Beatles were influenced by black artists as he praised the Black Lives Matter movement.

He said: “There’s no greater act any of us can make than to stand up and be counted when you see injustice.

“I don’t have to tell you that the Beatles’ early success had a lot to do with the influence we found in American artists.

“We loved listening to Ray Charles, Little Richard is my hero, Stevie Wonder, Sister Rosetta Tharpe – I saw her live at the cabin – and my stepdad’s favourite, Billy Eckstine. The list goes on and on.”

He added: “Black lives matter. Stand up and make your voice heard.”

Each year for his birthday, Liverpool-born Sir Ringo usually asks his fans to call for “peace and love” around the world. Last year he gathered outside the Capitol Records Building in Hollywood.

After joking he still feels 24 years old, video from throughout Sir Ringo’s life played alongside his hit song Photograph.

He signed off the stream with his trademark call for “peace and love”.