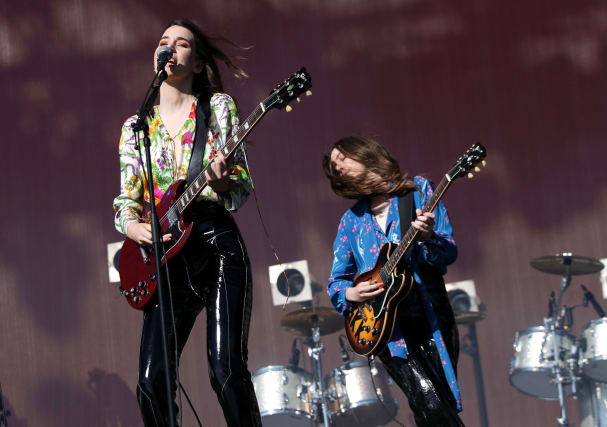 American pop-rock trio Haim have gone straight to number one with their third album, Women In Music Pt III.

The group – made up of sisters Este, Danielle and Alana Haim – lead the way by 4,000 chart sales.

It is their second number one album, after their 2013 debut Days Are Gone also topped the charts, with their 2017 follow-up Something To Tell You peaking at number two.

They told OfficialCharts.com: “The UK has always supported us and we are forever grateful.

“We wish we could celebrate with you all but we feel your love all the way here in Los Angeles.”

Last week’s number one, Bob Dylan’s Rough And Rowdy Ways, is at number two, while Jessie Ware’s album What’s Your Pleasure? is at number three.

On the singles chart, Jawsh 685 and Jason Derulo claim number one with their viral hit Savage Love (Laxed – Siren Beat).

The song started life as a melody on social media platform TikTok made by 17-year-old New Zealander Jawsh 685, before Derulo wrote lyrics to the tune.

Savage Love lifts from four to one this week, with 57,000 chart sales, including six million streams.

Jawsh 685 told OfficialCharts.com: “Being a youngin from South Auckland hitting the charts heavy to the point where we hit Number 1!

“Honestly it is just the biggest blessing I could have ever received, seeing it happen to not only me but for my family and friends!

“As always from here on out, thank you for all the support and love from around the globe! Stay safe, stay styla”.