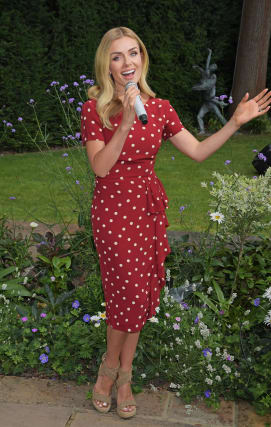 Katherine Jenkins has urged the public not to forget the older generation after singing to care home residents, their families and staff in a live-streamed concert from her garden.

The Welsh mezzo-soprano said it was important people did all they could to ensure the elderly stayed connected while social distancing continued.

Jenkins, who celebrated her 40th birthday last month, battled rain and wind to perform hits such as You Are My Sunshine, You’ll Never Walk Alone and We’ll Meet Again.

Her performance was streamed into 100 care homes across the UK via Facebook Live on Vodafone UK’s page.

Speaking to the PA news agency after, she said: “The performance felt a very natural fit because my mum has just slipped into that seventies bracket.

“She was widowed quite young and I knew she would be on her own for all those weeks during lockdown.

“When it first happened I thought of people like mum, countless people who will be on their own.

“These are people who are potentially scared, lonely, and not really aware of what is happening in these times.

“I started doing online concerts on Saturdays and so when Vodafone approached me to do this, it seemed like a positive thing to do.

“It’s really important that we don’t forget this generation and do all we can to help them get through it as well.”

Jenkins held a microphone in one hand and an umbrella in the other for most of her set, chatting to residents in some of the care homes.

She said: “It was one of those things. I was being a hardy Welsh girl and saying ‘I don’t need the umbrella’ but then actually it got quite heavy.

“But I thought that it doesn’t matter. I’m used to singing in the rain. It’s totally fine, I can do it.”

Jenkins also dedicated a rendition of Here’s To The Heroes to the UK’s frontline staff, saying: “This is for our NHS and our carers, all the people going above and beyond right now. This is for them because they are our heroes.”

Speaking about the song, she said: “I love to see the positivity from the care homes.

“They have been in this situation for all this time, and they are still smiling and singing.

“That just goes to sum up the spirit there.”

Jenkins, who releases her latest album Cinema Paradiso this month, also remembered Dame Vera, who she sang with a number of times.

She said: “Dame Vera was an icon and an inspiration and I saw her as a mentor and a friend.

“She meant so much to so many. That song has always felt very emotional for me.

“It really captures a sentiment that we need now and we needed then.”

TV presenter Angellica Bell introduced the performance and spoke with residents, including Audrey Grogan at Anchor’s Blackbrook House in Colchester, who celebrates her 109th birthday this month.

– Katherine Jenkins entertained UK care home residents, carers, their families and thousands of people at home with a live-streamed singalong, powered by Vodafone. The special broadcast was part of Vodafone’s commitment to helping the UK’s older community keep connecting.