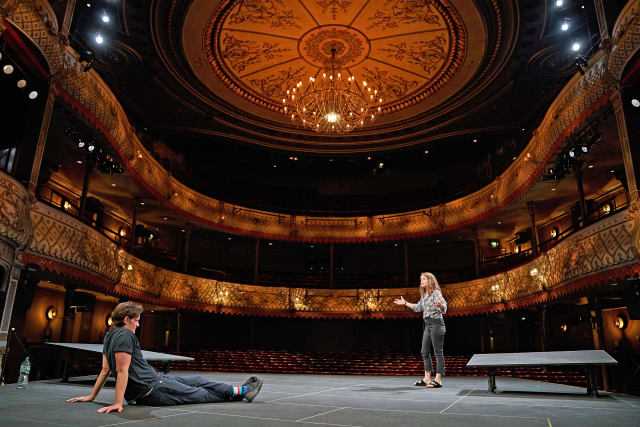 Claire Foy and Matt Smith have given a socially distanced performance of a play from an empty Old Vic theatre.

The pair starred in Duncan MacMillan’s Lungs in a performance that was streamed live to an audience watching from home.

The play was raising money for the theatre at a time when its income has been severely dented as a result of lockdown restrictions.

Foy and Smith completed the performance on a bare stage without props or a set and remained at a distance from each other.

At the end the pair, who play lovers wrestling with environmental and relationship problems, exchanged a kiss through a large pane of glass.

The actors were reprising their roles in the play after they made their Old Vic debuts to sell-out crowds last year.

They will now perform the show eight times over the brief run until July 4, with many of the shows sold out.

At the beginning of Friday’s performance, the Old Vic’s artistic director Matthew Warchus said: “Like every other theatre, the Old Vic is currently closed to audiences and most of our staff are furloughed.

“So these plays will all be presented on a bare stage with no scenery, no theatrical lighting, making it feel much more like a private rehearsal than a full production.”

He added: “By buying a ticket you are playing a big part in an effort to keep this theatre afloat at a time when the entire industry is in a critical state.”

The performance was made available for up to 1,000 people to replicate the theatre’s usual size.

Tickets were priced as they are in the auditorium from £10 to £65, but with all seats at home offering the same view of the show.

The Old Vic is a registered charity and does not receive a regular public subsidy.

Mr Warchus has previously said the theatre is in a precarious position as a result of the pandemic.

Why you should avoid DIY Dentistry