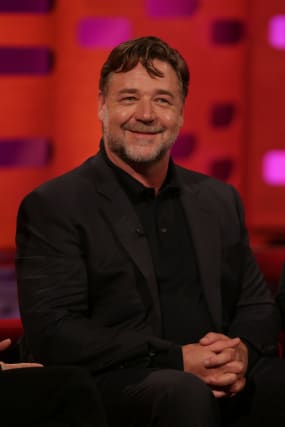 Russell Crowe said the first Gladiator script he read was “so bad”.

As well as being a global box office smash, Gladiator was also named best picture at that year’s Academy Awards.

However Crowe, 56, has revealed he was initially far from sure the film would be a hit.

During an appearance on The Tonight Show Starring Jimmy Fallon, he said: “Gladiator was a unique experience because the script that they had was so bad, it was just so bad.

“The producer didn’t know I’d actually already been able to get a copy but the thing he said is ‘I don’t want to send you the document we have, because you won’t respond to it’.”

Instead, the producer set up a meeting between Crowe and Sir Ridley, who convinced him to take on the role.

He said: “He was so prepared and the things he was showing me and the visual images and the mathematics of how he was going to not have to build an entire Colosseum yet still shoot the Colosseum. And we just clicked on that first meeting.”

While Crowe admitted he did not think the film was going to be a success at the start, his mind was changed after working with co-stars including Joaquin Phoenix, Oliver Reed and Sir Derek Jacobi.

He said: “By the time I was leaving the set I definitely felt the collective energy of that cast was fantastic.

“You sit back and you think about who was actually in that movie, great English actors like Derek Jacobi and Oliver Reed and David Hemmings. And then you’ve got actors like Tomas Arana and Djimon Hounsou.

“And then you’ve got Connie Nielsen with a career best performance, you’ve got Joaquin Phoenix just smashing open anybody’s assumptions of what a character like that could be. Everybody bought into it.”

Gladiator celebrated its 20th anniversary in May. Crowe said he and Sir Ridley laugh when looking back on the film.

He said: “When Ridley and I sit together and talk about it the main thing we do is just laugh about what we got away with. Ridley’s attitude is ‘just how many bullets did we dodge in one movie?'”