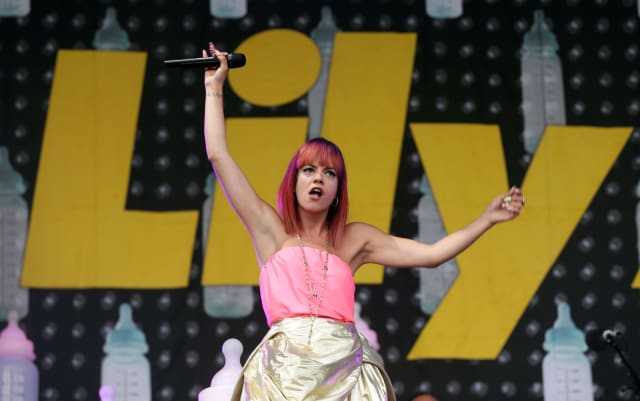 Lily Allen has shared a throwback photo of her performance at Glastonbury in 2014, admitting that it came just before things began to “fall apart” in her life.

This weekend, the Somerset music festival would have celebrated its 50th anniversary – but it was called off due to coronavirus.

Allen, 35, has played a number of times at the festival including in 2009 and 2014, both times appearing on the Pyramid Stage.

In a series of posts, Allen told her 1.2 million Instagram followers: “Sad not to be on worthy farm this weekend. You can catch me in this get up from 2009 on @bbciplayer.”

Another post read: “And here’s me at Glastonbury in 2014 just before things really started to fall apart.

“It’s hard for me to look at these but I feel like I’ve come so far since then and I am so much happier and healthier.”

Following the release of her album Sheezus in 2014, the star experienced what she has described as an “identity crisis”, prompted by pressure from inside the music industry and conflict in her personal life.

In mid-2015, the singer split from her husband Sam Cooper after being married since 2011, with their divorce finalised in 2018.

Allen detailed her troubled past in her memoir My Thoughts Exactly, in which she also revealed that Coldplay frontman Chris Martin and Gwyneth Paltrow staged an intervention encouraging her to seek help.

The singer is now in a relationship with Stranger Things star David Harbour.

The couple had been self-isolating together alongside Allen’s two daughters Marnie and Ethel, from her marriage to builder Cooper.

Sir Paul McCartney, Taylor Swift and Kendrick Lamar were all due to headline the Pyramid Stage at Glastonbury this weekend.