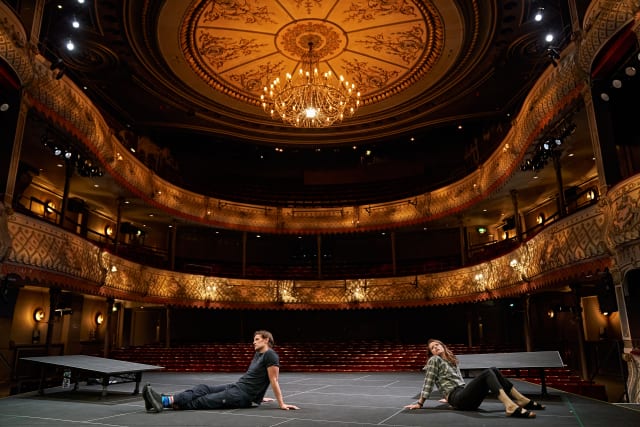 Claire Foy and Matt Smith will reunite to star in a socially distanced play on stage in an empty Old Vic theatre on Friday to boost the theatre’s flagging box office revenue.

The Crown stars will reprise their roles as a couple wrestling with the dilemmas of the planet in Duncan MacMillan’s play Lungs.

The pair made their Old Vic debuts in the play to sell-out crowds last year and will now return to the theatre to revive the production in front of a virtual audience watching live at home from 19 different countries.

They will perform the show eight times over the brief run until July 4, with many of the shows sold out.

It will be part of Old Vic: In Camera, which will also include a series of rehearsed play-readings streamed live from the stage with the empty auditorium as a backdrop.

The project is an attempt to revive the theatre’s box office revenue, which was wiped out by the coronavirus crisis.

The theatre, which is a registered charity, does not receive a regular public subsidy and artistic director Matthew Warchus has said it is in a perilous position as a result of the pandemic.

Varah added: “Matthew has been really clear that this is not a new medium, or a new way of doing theatre, this is a sticking plaster that is going to help us get through, in part, financially until reopening.

“There are of course things that you will miss, it’s not just the alchemy and the chemistry between the performers and the audience, it’s the audience with each other, as well.

“It’s definitely a challenge to try and replicate that but we are almost not trying to do that, what we are trying to say is ‘We can’t be with you live now, we can’t be with each other, but it doesn’t mean we can’t share something together’.

“This is an opportunity to keep the theatre going, to bring some interest and diversion into homes during lockdown and to respond to the really amazing offers of support by actors like Matt and Claire who have been incredibly brave and supportive of us and willing to try something new and perhaps out of their comfort zone.”

Each performance in the series has been made available for up to 1,000 people to replicate the theatre’s usual audience capacity size, with tickets priced as they are in the auditorium from £10 to £65, but with all seats at home offering the same view of the show.