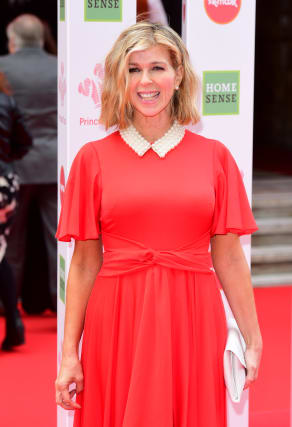 Kate Garraway has penned an emotional Father’s Day tribute to her husband as he battles to recover from coronavirus.

Derek Draper, 52, was taken to hospital at the end of March after he was displaying coronavirus symptoms and struggling to breathe.

The Good Morning Britain presenter said it was a “tough day”, adding that her husband is “officially the best dad in the world” according to his children.

She added that Draper is “never happier” than when he is with his daughter and son.

“Whatever happens next I’m afraid it is going to be a long road, with an uncertain end that isn’t even nearly in sight right now,” Garraway said.

“But this week I am refocusing on hope that as a family we are going to pull together with the support of friends and get through everything come what may.”

The “amazing people keeping Derek alive stand shoulder to shoulder with me in never giving up on him and, of course, hope that my wonderful Derek is going to keep fighting this and eventually start to slowly recover”, she added.

Earlier this month, the presenter revealed she had been warned by doctors that her husband may never fully recover from his battle with coronavirus.

Draper had been put in an induced coma by doctors.

The pair have been married since 2005.

A number of other celebrities shared Father’s Day messages on Sunday.

Reality star Kate Ferdinand shared a tribute to her husband and former footballer Rio after the pair announced earlier this week that they are expecting their first child together.

She wrote on Instagram: “Can’t wait for our next chapter. Let’s celebrate you today.”

The former Spice Girls star wrote: “Happy Father’s Day David Beckham! We all love you so, so much. So many kisses from us all.”

She shared the message alongside a picture of the pair with their children.